Even as fans await the highly anticipated return of boyband BigBang at the prestigious Coachella festival in California in April, their excitement has been dented by worry over singer T.O.P's behaviour.

The 32-year-old recently posted that he would not make a musical comeback in South Korea because people "are just wicked".

Now, T.O.P has deleted all his Instagram posts, sparking worry among his fans, reported the koreaboo portal.

One fan echoed the concerns of many others by posting: "I hope he is (only) taking time off to rebuild himself and sort out his priorities, and is not thinking of doing anything foolish."

Another fan posted: "Don't blame him. Who wants to keep reading negative comments from people who don't know you, have never met you and never will?

"You can have 100 positive comments; it's the one or two negative ones that stand out and are remembered."

South Korea has a competitive music industry, with artists also subject to intense scrutiny from fans over their private lives.

Last year, the K-pop business was rocked by the deaths of two singers - Sulli and Goo Hara. They had reportedly drawn criticism from some netizens over their romantic relationships.

T.O.P himself has also not been spared over his lifestyle choices. 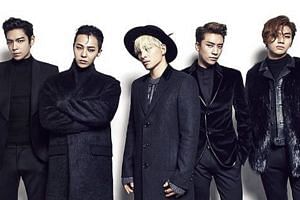 In 2017, he was given a suspended 10-month jail term for smoking marijuana.

But some fans think that his deletion of all Instagram posts may only signal his wish to start this year anew with his BigBang bandmates at Coachella, after they completed their mandatory military stints.

Another member, Seungri, left the band in March last year after he was linked to nightclub Burning Sun, which was said to have been a venue for drug-taking and sexual activities.