Hong Kong actress Cecilia Cheung has given birth to a baby boy, and he has turned one month old, a post on her studio's Weibo account confirmed on Monday morning (Dec 17).

The Weibo post said: "Dear fans, friends in the media, collaborators, the studio is very happy to represent Cecilia Cheung in announcing a piece of happy news: Cecilia Cheung gave birth to her third child in November, and both mother and son are healthy.

"Her children and family have always been the most important people that Cecilia has taken care of. In the future, Cecilia will give her all to build and enhance the quality of life for her three children as they grow older, and also work towards creating even better projects."

Referring to the baby as "Little Prince" in Mandarin, the post also said that the boy had reached one month of age.

At 10.30am on Monday, Cheung posted to Weibo a drawing of her and her three sons, with a short caption: "My Love" followed by a heart emoji.

The confirmation comes after reports from Hong Kong media in November speculated that Cheung had given birth to her third child, a boy, at Hong Kong Sanatorium & Hospital on Nov 25.

The studio also thanked everyone for the well wishes and concern. There were no details given on who the father of the child was. 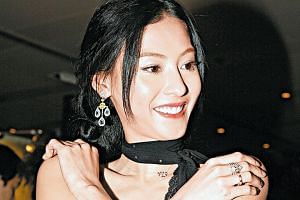 Is Singaporean tycoon, 65, the father of Cecilia Cheung's third son?

According to Chinese website Sina, Cheung is currently resting in Hong Kong, and has not announced any future work projects.

Cheung, 38, has two sons - Lucas, 11, and Quintus, eight - from her five-year marriage with actor Nicholas Tse.

Cheung, who moved to Singapore with her two sons after her divorce from Tse, was linked to a Singaporean tycoon in March this year. Her mother Davies Shally disclosed in a TV programme then that her daughter's new boyfriend is a 65-year-old businessman from Singapore.

Apple Daily reported in November that the tycoon is believed to be the baby's father. He is said to be from a rich family and owns a listed company. He is also reportedly a shareholder in a Singapore food and beverage chain.