SINGAPORE - "There's a scream permanently lodged in my throat now," writes American author Michelle McNamara in her true-crime book I'll Be Gone In The Dark (2018).

In the posthumously-published New York Times bestseller, she went after the Golden State Killer, who prowled California in the 1970s and 1980s and is thought to have murdered at least 13 people and raped 50 women.

She gave the killer his moniker, after writing about him in articles and on her website prior to the book's publication, and drew public attention to a case long cold.

Her obsessive pursuit - poring through case files, interviewing survivors and investigators, chasing down the tiniest leads such as stolen cuff links and genealogy websites - ended when she died in her sleep, aged 46, in 2016. She never got to see the arrest of a suspect, 72-year-old Joseph James DeAngelo, last year, more than 40 years after the killer first struck.

Her widower, actor and comedian Patton Oswalt, says in an e-mail to The Straits Times of true-crime writing: "It's a way to figure out the unknowable, especially in a time when 'the truth' seems too fluid."

Oswalt, 50, worked with researcher Paul Haynes and journalist Billy Jensen to finish the book after McNamara's death. "I hope it helps (readers) understand the enormity of a crime like this," he adds, "and the effect it has not only on the victims themselves but on their loved ones, their families and friends, and on the police who try to capture the killer."

Several true-crime titles have recently shed new light on old crimes and cold cases, which continue to grip readers despite the years that have since passed. These range from McNamara's to American journalist Casey Cep's investigation into the true-crime book that To Kill A Mockingbird author Harper Lee never finished, to the new edition of Tan Ooi Boon's A British Serial Killer In Singapore.

Tan, now 51, was a young crime reporter at The Straits Times in 1995 when a pair of legs was found in the sea off Clifford Pier. They belonged to a victim of John Martin Scripps, the first serial killer to be hanged in Singapore. The Briton befriended and butchered three tourists for their credit cards. 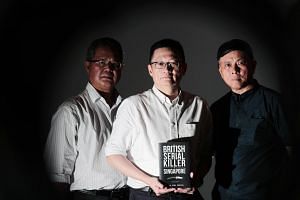 Guilty As Charged: Shocking crimes that have shaken Singapore since 1965

"Disarticulated," recalls retired police inspector Zainudin Lee, 65, who to this day, cannot forget the word that the forensic pathologist used to describe how Martin cut up his bodies, adding: "We could be dealing with a serial killer."

Tan, now senior vice-president and general manager of The Straits Times Education and Press, first published the book in 1996 and decided to reissue it in May this year in an updated edition. He added fictionalised accounts of how the murders happened to better tell the story. "A whole generation of Singaporeans grew up not knowing this case existed," he says.

Mr Zainal Abidin Ismail, 61, who was staff sergeant on the case, says the new edition reminded him of the intense energy that drove the investigation. He recalls lying on his back on the floor of the hotel bathroom where the killer had cut up the body. It had been cleaned, but he spotted a tell-tale bloodstain under the toilet bowl that would prove a crucial lead.

Tan and the former policemen view the book as a cautionary tale for youngsters, especially in the age of ride-sharing, Airbnb and overwhelming faith in Singapore's low crime rate. "Don't be too trusting of strangers," says Mr Zainal. "Never be complacent."

The book joins other notable Singapore true-crime such as Guilty As Charged (2017), an anthology of 25 crimes that shook Singapore. Edited by ST associate news editor Abdul Hafiz, it spent 28 weeks on the ST bestseller list and won the Popular Readers' Choice Awards last year. 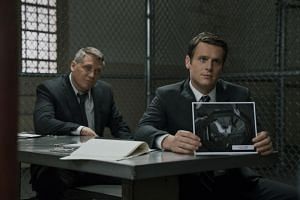 True-crime has had an enduring fascination for readers, but its hold on the mainstream of late has been bolstered by the popularity of shows in the genre such as Netflix's Mindhunter, which is based on a true-crime book, and cult podcasts such as Serial and My Favourite Murder.

The interactive, democratised nature of the podcasting trend was something borne in mind by the creators of Unsolved Murders, an anthology of 20 such crimes published in February by British company DK Books.

"We wanted our book to reflect this new way of engaging with crime investigation as much as possible, and provide a clear path between what is fact and what is rumour or speculation," says DK senior editor Alastair Dougall in an e-mail interview, adding that people are increasingly drawn to true-crime to "make sense out of apparent chaos".

The genre has a reputation for lurid sensationalism, its devotees derided for their morbid curiosity in the suffering of others.

In Murder By The Book (2018), British literary biographer Claire Harman examines the controversy around the case of Lord William Russell, who in 1840 was found in his bed with his throat cut.

The case shocked Victorian London and drew in famous literary figures such as Charles Dickens and William Thackeray. When the murderer, Lord William's valet, claimed he had been inspired by Jack Sheppard, a pulpy novel about a real-life criminal, it prompted widespread moral panic against the genre, even as the populace waxed so bloodthirsty that an estimated 40,000 people gathered at Newgate prison to watch the accused hang.

"I'm quite squeamish," says Harman, 61, over the telephone. "I find the taking of a real person's life shocking and horrible and the fact it gets turned into stories and entertainment so much is something we need to recontextualise. Gory details for their own sake are prurient and sensationalist.

"But crimes in a historical context can be educational and will tell you a lot about human nature, even if (what we learn) is that human nature doesn't change very much."

True-crime has been around for most of literary history - trial narratives are arguably as old as the Oresteia, ancient Greek playwright Aeschylus's 5th century BC account of the murders of Agamemnon and Clytemnestra - but a landmark work that brought respectability to the genre was Truman Capote's In Cold Blood (1966), a "non-fiction novel" about the murders of the Clutter family in a small Kansas farming community.

Capote was assisted in the book's research by his friend Harper Lee, who would later go on to attempt her own true-crime book, The Reverend, about Alabama preacher Willie Maxwell, who was suspected of murdering five of his family members for insurance money in the 1970s but never found guilty.

A relative shot him dead at the funeral of his latest alleged victim. But even though 300 people witnessed the shooting, Maxwell's murderer was acquitted - thanks to the same lawyer who had so successfully defended Maxwell.

Lee never finished The Reverend, a mystery mired in obscurity until American journalist Casey Cep, 33, dug it up in 2015 while reporting on the surprise publication of Lee's earlier manuscript Go Set A Watchman. In May this year, Cep published Furious Hours, a melange of true-crime, legal thriller and literary biography.

"I don't agree with those who say writing a book like Furious Hours somehow redeems a tragedy by drawing meaning from it," says Cep in an e-mail interview. "Not even a beautiful book brings someone's murdered loved one back to life.

"But I do think that we are morally obligated to reckon with crime, including, as I try to do in mine, with social crimes like slavery and discrimination, financial crimes like fraud and exploitative labour practices, and political crimes like disenfranchisement."

For American Jeffrey L. Rinek, who spent 30 years with the FBI (Federal Bureau of Investigation), writing about crime was a form of release.

Rinek, 66, investigated hundreds of crimes against children and would gain confessions from child predators by showing them empathy - a technique that took a huge emotional toll on the interrogator.

His book, In The Name Of The Children (2018), co-written with journalist Marilee Strong, looks back at the cases that still haunt him, such as the 1996 rape and murder of an eight-year-old boy whose body he found "thrown away by the river like a piece of trash".

He remains in contact with several of the surviving victims, among them a group of children who were raised by their fathers to be traded in a sex cult, and showed them the chapters concerning them for their approval before publication.

"I still have nightmares about the children," he says over the telephone. "I live with it every day." He also writes in the book about his own post-traumatic stress disorder and suicide attempts.

He believes that good can come of true-crime writing if it is done responsibly. "There are people who, when they drive past a car accident, will slow down to look because they're curious. Some people follow true-crime because of the same type of desire.

"But there are also people who desire to do something good in their lives if they are called upon and they will follow true-crime to see if there is something they could have done if it happened to them or to see if they are able to help. And I like to believe in the goodness of people."