SINGAPORE - When Straits Times crime reporter Tan Ooi Boon heard that the missing head of a victim of serial killer John Martin Scripps could be found in Orchard Road, he knew he had a major scoop.

An anonymous source had told him that the Briton, who in 1995 became the first serial killer to be convicted in Singapore, had confessed to dumping the head of his South African victim in Orchard Road.

It was a juicy story that never went to print. Instead, Mr Tan shared the information with the investigators on the case.

Today, they believe the confession could have been a red herring that Martin had thrown out at the last minute, hoping to provoke a mistrial.

Speaking at The Straits Times Book Club on Wednesday, Mr Tan, author of the true-crime book A British Serial Killer In Singapore, said: "In movies, the press is always shown trying to undermine the police and the police are trying to keep the press out.

"But this case showed that media and police can work together. Reporters should never do anything that will jeopardise an investigation or give a reason for criminals to run away."

About 140 people gathered at the National Library headquarters on Wednesday to hear Mr Tan - now senior vice-president and general manager of The Straits Times Education and Press - discuss the book, which was first published in 1996 after Martin was hanged and was reissued earlier this year. 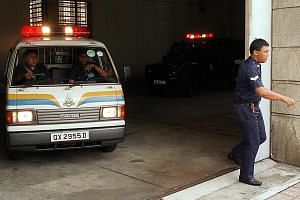 Two of the case's investigators, Mr Zainal Abidin Ismail and Mr Zainudin Lee, who have since retired from the police force, joined him in recounting how they brought Martin to justice.

The Briton befriended and killed three tourists for their credit cards, cutting up their bodies with skills he had picked up as a butcher in prison. He was believed to have killed more people in other countries.

After killing a mother and son in Phuket, he returned to Singapore, where he had earlier murdered the South African tourist, and was arrested at Changi Airport.

Mr Tan could have run a scoop earlier on the identity of the South African victim, but held back upon request from the police. "If (Martin) had read the news, he would never have come back," said Mr Zainal, 61.

Mr Zainudin, 65, recalled how devious Martin was even at the 11th hour, when he invented a "British friend" whom he said was staying at a nearby hotel and had helped him carry out the crime.

"He spun more webs than Spider-Man," he said, recalling how much "agony" it was disproving every single one of Martin's alibis within the tight timeframe - there was less than a year between crime and conviction - but the case had to be watertight.

Mr Sameer C. Mohindru, 42, a senior editor at an energy news provider, who was at the session, said it was "interesting and especially relevant to Singaporeans - we are reminded that low crime does not mean no crime".

The next Straits Times Book Club session on July 31 will discuss Think Wits Win by Soo Kok Leng, which parlays Sun Tze's The Art Of War into business approaches. Readers can register for the talk at str.sg/oykx