The short notice has shocked several exhibitors and left them scrambling for alternative exhibition venues.

Art Stage Singapore, which started in 2011 with backing from various government agencies and is regarded as Singapore's main art fair, was to run this year from Jan 25 to 27. It had 45 exhibitors, including 15 from Singapore.

The fair was to happen during Singapore Art Week, an annual public arts festival organised by the National Arts Council (NAC), the Economic Development Board (EDB) and the Singapore Tourism Board (STB).

Gallery representatives who spoke to The Straits Times said they received an e-mail on Wednesday morning (Jan 16) from Art Stage's founder and president Lorenzo Rudolf, asking them to "cease all preparations for Art Stage Singapore 2019" or to reverse them.

"The given circumstances, about which we shortly will inform you, unfortunately leave no other choice," he said in the message.

It added: "We will soon inform you about the next steps. We apologise for any inconvenience you may experience."

A joint statement from NAC, EDB and STB said: "We are disappointed that Art Stage Singapore has cancelled the 2019 edition of its fair. It is unfortunate that exhibitors, partners and collectors who had planned to take part in the fair, will be impacted by this development. We understand that the cancellation is a commercial decision."

A spokesman for Marina Bay Sands confirmed that Art Stage Singapore has cancelled its show at the Sands Expo and Convention Centre. The spokesman added that tickets bought through Marina Bay Sands' system would be refunded to affected customers.

Gallerists like Ms Lydie Blandeau are fuming. The chairman of Paris- and Singapore-based gallery Visionairs says it is the first time in her 10 years participating in art fairs that a cancellation notice has been sent the week before the event and without an explanation.

"How can we justify this to our artists? We spent money upfront to create the artwork, we invested a lot of money shipping from Europe and New York," she says.

One of the works she planned to show was a watch that cost $100,000 to make. "This hurts the image of Singapore," she adds. 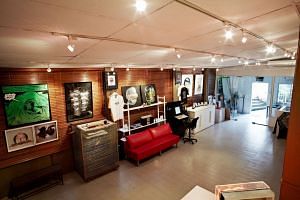 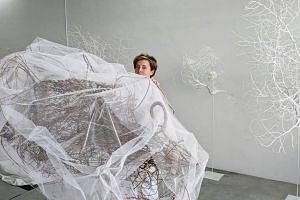 Art Stage Singapore started here in 2011 as a flagship art fair for South-east Asia, helmed by Swiss national Rudolf, who used to be director of Art Basel in the mid-1990s. It had the backing of the EDB, STB, National Heritage Board and NAC.

The fair has competition from new Taiwan-based art fair Taipei Dangdai from Jan 18 to 20, and a new showcase of galleries in Singapore, S.E.A. Focus, helmed by local curators, and running at Gillman Barracks from Jan 24 to 27.

Marc Straus Gallery's director, Singaporean Ken Tan, who spoke to The Straits Times from New York, says his gallery has invested a "five-figure" sum in the fair this year, including paying for the booth at Marina Bay Sands (prices range from $$11,750 to $$67,500 on the fair's application form), shipping out artworks and paying for artists to be in Singapore.

He hopes to recover some of the gallery's costs through insurance and says communication with Art Stage Singapore has been sparse since the beginning of this month.

Art Porters Gallery co-founder, Guillaume Levy-Lambert, says that they had planned a solo showcase of seven paintings by Indonesian artist Naufal Abshar, which were specially created for Art Stage Singapore and arrived in Singapore on Tuesday. The works will be presented at his Spottiswoode Park Road gallery instead.

"We are more concerned that it's embarrassing for Singapore. I have friends in overseas galleries who have already shipped over their works, and booked flights and hotels," he says. "It's also the reputation of Singapore as an arts hub that is at stake."