SINGAPORE - Every time my neighbour starts his car or backs into his driveway, I get a pungent whiff reminding me that combustion cars - even those which are Euro 6 compliant like the one next door - have no place in the urban landscape.

If you walk, jog or cycle, you will understand the above-mentioned predicament, especially when a bus or truck passes you.

Bloomberg recently reported that global deaths from polluted air exceed 10 million a year - four times the total number of Covid-19 fatalities since the pandemic started in 2019.

Addressing this modern-day scourge can start on the road. To be sure, electric vehicles (EVs) are not entirely emissions-free. Power generation is still largely dependent on non-renewable fuels.

But the emissions occur some distance away from population centres. So, if we all switch to EVs, the air in the places we live, work and play will be much cleaner. The ambient noise level will also be lower, on account of the inherent quietness of electric motors.

Even if we factor in the fuel-to-power efficiency of electricity generation (48 per cent in Singapore), EVs still pip the most efficient petrol vehicles and far exceed the average models.

The benefits of EVs thus have huge implications on the health and well-being of humans, as well as the planet they inhabit.

So why have most countries been dragging their feet when it comes to promoting EV adoption? One reason could be there had been a number of false starts.

The very first cars were electric, but they were eventually overtaken by combustion engines, which were made more affordable by the Ford Model T and the discovery of cheap oil in Texas a century ago.

The 1970s oil crisis and rising environmental concerns in the 1990s saw a tentative return of EVs. But they faded almost as quickly as they resurfaced.

It was not until a Silicon Valley start-up announced in 2006 that it was to launch an electric sports car with a range of more than 320km that the wheels of change actually began to have traction.

Today, Tesla is synonymous with EVs. And all the other carmakers have been trying to play catch-up, nudged along by tightening emission standards.

Singapore has also stepped up in the last two years, announcing bigger purchase incentives, lowering road tax and drawing up an electrification road map which includes fortifying the grid and building 60,000 charging points by 2030.

Unlike previous attempts to make transport greener, there are now deadlines in place. Singapore aims to phase out vehicles which run purely on combustion engines by 2040. 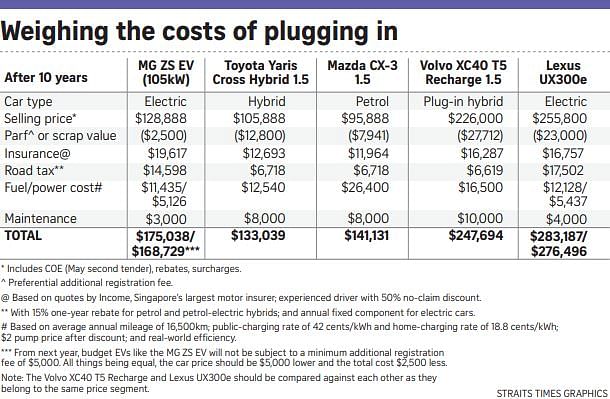 Even though hybrids - a second-best solution - will still be allowed, it is a step in the right direction to clear the air.

But will the incentives be enough? A cost analysis using popular compact and subcompact models shows that EVs are still 10 to 20 per cent costlier to own over a 10-year period than their petrol or hybrid equivalents.

This is partly to do with a special tax imposed on EVs that is designed to be in lieu of petrol duty, which EVs do not incur.

Insurance premiums for EVs are higher, too, since they are deemed to be costlier to repair should there be an accident, especially if the battery is damaged.

Still, a 10 to 20 per cent price premium over combustion equivalents is not too huge to overcome. As recently as three years ago, the gap was at least twice as wide.

Also, EVs have an edge over combustion models, whose lower scrap value - sometimes zero - makes it less punitive for owners to keep them beyond 10 years.

The best-selling MG ZS EV, for instance, clocks an 8.2-second century sprint, which is quicker than the Suzuki Swift Sport, a hot hatch.

EVs are super quiet and vibration-free. Even mass-market models will match the refinement of luxury petrol cars which cost twice or three times more.

And of course, EVs have a low impact on their surroundings. Even if one pulled up right next to the roadside coffee shop where you are having breakfast and left its air-conditioning running, you would not be inconvenienced in the least.

Although less quantifiable than dollars and cents, these benefits are real.

More On This Topic
Are electric vehicles really greener?
Electrified offerings to suit every motorist

Retiree Bernard Chew, who drives a Hyundai Kona Electric, says cost was not the main consideration when he bought it in 2019, when incentives were much less attractive.

"In the bigger scheme of things, the price premium doesn't make much of a difference," the 54-year-old says.

"I just wanted to be less reliant on fossil fuels. I am quite environmentally conscious. I take public transport if there is no need to drive. I walk sometimes if my destination is 15, 20 minutes away."

He also recycles religiously, drove a Toyota Prius hybrid before the Kona Electric and installed solar panels when he was living in a landed home.

He now lives in a condominium apartment in Upper Bukit Timah and relies mainly on a Shell fast charger near Bukit Batok Nature Park to juice up his EV.

"It's five minutes' drive away. I take a walk around the park and in 30 to 45 minutes, the car is fully charged," he says.

Businessman Koh Jie Meng, who has been leasing a Kona Electric since 2019, says there are nonmonetary costs associated with combustion vehicles.

"There is much less downtime with an electric car," adds the 30-year-old, who also drives occasionally for ride-hailing firm Grab.

"My Kona has done 150,000km and doesn't even require brake pad replacement."

He explains that EVs have regenerative brakes - which convert stopping power to electricity - and are therefore less prone to wear.

But he has had three rounds of tyre change, which is covered by his $2,500 monthly lease.

For a combustion car, yearly visits to the workshop for servicing is a given, he adds. Then there are breakdown repairs. In fact, it was after his previous car broke down and he faced a huge repair bill that he decided to switch to an EV.

At that time, his engineering firm was doing some infrastructural projects for Greenlots,the EV charging company now owned by Shell.

Mr Koh had his eye on a Tesla, but the US company, which first arrived here in mid-2010, left in early 2011 when it failed to secure green tax breaks.

"It wasn't clear when Tesla would set up shop here again. Then I found out that Grab was leasing the Kona Electric," he says.

Soon after Tesla returned to Singapore early this year, he placed an order for Tesla Model 3 Standard Range for around $113,000 before certificate of entitlement.

Having to rely on public chargers is no hassle, says Mr Koh, who lives in a Housing Board flat in Yishun.

He uses chargers by SP Group and Shell.

"I do my grocery shopping or go for a movie. By the time I'm done, the car is charged."

And even though public charging costs twice as much as home charging, "it is still far cheaper than filling up with petrol", he says.

While the numbers are still minute compared with Singapore's total car population of around 640,000, conversion could pick up speed from January, when the latest batch of incentives kicks in.

Meanwhile, observers reckon EV retailers have to be willing to endure thinner profit margins so as to put more cars on the road - a strategy Tesla seems to be pursuing.

Also, government incentives may have to be enhanced yet again if Singapore is to meet its 2040 target, or disincentives will have to be raised to push people away from fossil fuels.

Quite likely, it will be a combination of both - at least until EVs reach price parity with combustion models, something optimists expect to happen as early as 2025.

Regulations should also stipulate a rising percentage of electrified vehicles each brand sells here a year. This is to prevent sellers from taking advantage of tax incentives to fatten their own profit margins.

Such measures must be extended to commercial vehicles, buses and motorcycles as well if we hope to improve air quality appreciably. These vehicles are far bigger polluters than cars.

It would be rather futile if half the cars here are electric, while the others continue to belch smoke.