SINGAPORE - Singapore's non-oil domestic exports (Nodx) worsened further to 15.9 per cent year on year in May, the biggest drop in more than three years as electronic exports plunged.

The decline beat analysts forecasts of a 18.7 per cent contraction, as polled by Bloomberg. But it was larger than the 11.8 per cent and 10 per cent drops seen in March and April respectively, topped only by the fall of 16 per cent in March 2016.

Enterprise Singapore, in releasing monthly external trade data on Monday (June 17), noted that the decline came off a high base a year ago.

Analysts expect Nodx to remain weak due to the cyclical slowdown in the global electronics market and United States-China trade tensions.

“With the broadening of the US-China trade war to a tech war, Singapore may face increasing pressure and collateral damage,” said Maybank Kim Eng economists Chua Hak Bin and Lee Ju Ye. They noted that many of the multinationals that are abiding by the US export controls – Intel, Micron, Broadcom and Panasonic – have a presence in Singapore.

However, there may be temporary respite in June, said Nomura research analysts Euben Paracuelles and Charnon Boonnuch. They pointed to China’s front-loading of exports to the United States ahead of proposed further tariff increases, which may temporarily create demand for exports from Singapore, given the country’s role in the regional supply chain.

Singapore’s electronic exports plunged by 31.4 per cent in May, following a 16.3 per cent dip in the previous month. This was the sector’s third consecutive month of double-digit decline.

“The US ban on Huawei is also expected to result in rippling effects across the electronics supply chain, which may inadvertently pressure the semiconductor and disk media industries that form a substantial portion of Singapore’s electronics exports,” he said.
Meanwhile, non-electronic exports declined by 10.8 per cent, after the 8 per cent fall in April.

Civil engineering equipment parts (-92.4 per cent), non-monetary gold (-72.4 per cent) and petrochemicals (-14.7 per cent) contributed most to the decline. 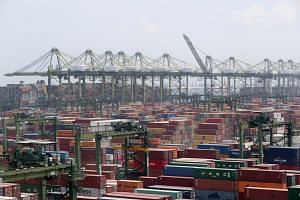 Singapore non-oil exports fall 11.7% in March, the biggest drop in more than 2 years

On a month-on-month seasonally adjusted basis, Nodx rose by 6.2 per cent in May, following the decline of 0.7 per cent in the previous month.

Singapore’s non-oil exports to the majority of the top markets – except the United States – decreased in May, said Enterprise Singapore.

Non-oil re-exports rose 5.1 per cent in May, slightly lower than the 7.7 per cent increase in April, due to the growth in both electronic and non-electronic re-exports.

Total trade decreased by 2.1 per cent over the 12 months till May, after climbing 3.2 per cent in April. Both exports and imports declined – total exports fell by 3.4 per cent, while total imports slipped 0.5 per cent.

On a month-on-month seasonally-adjusted basis, total trade grew 3.6 per cent in May. It reached $88.1 billion, up from $85 billion in April, after accounting for seasonal variations.