SINGAPORE - Raising the Central Provident Fund (CPF) contribution rates for older workers to put them on a par with those of younger workers could help them save between $31,000 and $145,000 more by the time they retire, researchers have found.

The Institute of Policy Studies (IPS) said in a policy brief on Wednesday (June 26) that a worker aged 55 last year would be able to accumulate those savings in his Ordinary and Special Accounts, depending on his income bracket, if the total contribution rates are 37 per cent until he is 65 years old.

Currently, the rate is 37 per cent for workers up to 55 years old.

IPS research associate Damien Huang and senior research fellow Christopher Gee said in the paper that raising CPF contribution rates may encourage older workers to remain employed, and will help younger workers to save more through the system while they work.

"However, a contribution rate increase is not without its downsides, chiefly an increase in wage costs to employers and a decrease in disposable income to workers," they noted.

They expect the change would add about $800 million to employers' wage bills in the first year.

To mitigate the costs, they recommended phasing in the change gradually or using temporary subsidies.

"This solution should also be preferable to paying higher general taxes for basic pension payouts to the portion of the population... who are unable to meet the CPF savings thresholds," they said. 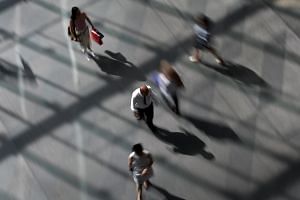 Why the statutory retirement age is important for Singapore workers

Confused about CPF payout age? All you need to know

They suggested that other mechanisms be used to increase the progressivity of the CPF system.

There have been calls, including from a group in the People's Action Party that champions causes for the elderly, for CPF contribution rates for older workers to be raised. They were on a par with younger workers until 1988 before being adjusted several times.

In 2016, the rates for workers aged 50 to 55 were raised to match those of younger workers.

The Tripartite Workgroup on Older Workers, which was formed last year, is looking at issues such as how CPF contribution rates affect retirement savings and will give an update by September.

A spokesman for the Manpower Ministry said it noted the IPS recommendations.

They also said that if the contribution rates were restored, an additional 21,790 people - or 10 per cent of each five-year cohort - would reach their full retirement sum. But companies are already struggling with rising costs and the pressure to spend resources to digitalise, he said.

“Amid the economic uncertainties brought on by the ongoing US-China trade war, a gradual approach needs to be taken in the push to align rates for older workers with young ones. The effect on business costs need to be moderated or it may impact the employability of our older workers,” he said.