An update on raising the retirement and re-employment ages will be available by September, Manpower Minister Josephine Teo said in a Facebook post yesterday.

The Tripartite Workgroup on Older Workers is looking at how far and how fast the retirement and re-employment ages should be raised beyond 62 and 67, respectively.

The Manpower Minister had announced in March that representatives from the Government, unions and employers had reached a consensus on the need to raise the two ages. They have been studying this issue and others since May last year.

"There has been very good progress and a meeting of minds on how far and how fast both ages should be raised," Mrs Teo said in the Facebook post while attending the International Labour Conference (ILC) in Geneva.

"Besides attending the ILC together, there were many working discussions between the tripartite leaders on implementation details, including support to employers."

The workgroup is chaired by Permanent Secretary for Manpower Aubeck Kam, and has NTUC secretary-general Ng Chee Meng and Singapore National Employers Federation president Robert Yap - all of whom are attending the Geneva conference - as well as Mrs Teo as advisers.

In her post, Mrs Teo also referred to an article in the Chinese daily Lianhe Zaobao on Monday which said that in the last 27 years, the healthy life expectancy of Singaporeans rose 7.2 years to 74.2 years, while life expectancy rose 8.7 years to 84.8 years. 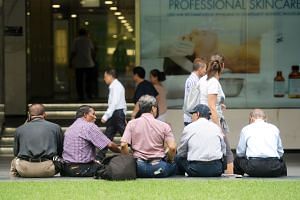 Why the retirement age is irrelevant for Singapore

Raising retirement age: How much does it really matter?

"I am encouraged by these statistics. People living longer and generally healthier lives is a key reason that they work longer - this is a trend that we observed across many developed countries," said Mrs Teo.

Currently, employers must offer eligible workers re-employment from age 62 up to 67. This can be done on yearly contracts, with flexibility in job scope and employment terms such as wages and benefits.

The age from which Central Provident Fund members can receive their payouts will remain unchanged at 65, even when the retirement age and re-employment age are raised.

"We have been able to focus on making longevity productive for both workers and employers," said Mrs Teo.