SINGAPORE - The Republic's core inflation continued to rebound in March, driven by higher services inflation as well as smaller declines in the costs of retail and other goods, electricity and gas.

This comes after it turned positive in February for the first time in a year.

Core inflation, which excludes accommodation and private road transport costs, rose to 0.5 per cent in March compared with the same month last year. It was 0.2 per cent in February.

Overall inflation also leapt to 1.3 per cent last month, from 0.7 per cent in February. The uptick reflected higher private transport inflation and the rise in core inflation, according to data released on Friday (April 23).

The Monetary Authority of Singapore (MAS) and the Ministry of Trade and Industry (MTI) said domestic price pressures are likely to gradually pick up as labour market conditions improve and private consumption recovers.

Overall and core inflation are both forecast to step up in the months ahead, partly reflecting low-base effects from last year and the effects of stronger domestic demand, they said.

"However, inflation is unlikely to accelerate in the second half of 2021 as business cost pressures are contained. Wage growth is expected to be muted as the slack in the labour market will take time to be fully absorbed while commercial rents are projected to stay low."

MAS and MTI added that private transport and accommodation costs could remain elevated on the back of firm demand for cars and rental accommodation.

Private transport costs surged to 7.2 per cent in March, up from 4.2 per cent the month before.

This was due to a larger increase in car prices and a turnaround in petrol costs that was partly boosted by a low-base effect as petrol costs fell a year ago amid plunging global oil prices.

Meanwhile, the cost of retail and other goods fell at a more gradual pace, at minus 1.5 per cent in March compared with minus 1.9 per cent the month before. The prices of clothing, footwear and personal items saw smaller declines, while the cost of household durables rose more strongly.

Electricity and gas prices likewise declined at a slightly slower rate as the Open Electricity Market had a smaller dampening effect on electricity prices following a slowdown in new take-up rates. They fell from minus 9.8 per cent in February to minus 9.7 per cent last month.

Food inflation dipped as the prices of both non-cooked food and prepared meals rose at a more moderate pace of 1.4 per cent compared with 1.6 per cent in February.

Accommodation inflation was unchanged at 0.5 per cent as housing rents continued to rise at a steady pace.

Singaporeans expect headline inflation to rise to 2.7% in year ahead: Survey

MAS and MTI added that external inflation is expected to continue rising in the near term amid recovery in global oil prices and turnaround in producer price inflation in several major economies.

"While there are some upside risks, the upward pressure on global inflation should ease in the latter part of 2021. Surplus oil production capacity should cap the increase in oil prices, while lingering negative output gaps in some of Singapore's major trading partners should keep a lid on import price pressures," they added.

UOB economist Barnabas Gan said the climb in prices has been relatively slow compared with the average 10-year headline and core inflation rates of 1.7 per cent and 1.5 per cent between 2010 and 2019.

He added that inflation could rise as disinflationary effects of last year’s government subsidies fade.

“However, the uncertainties surrounding Covid-19 remain pronounced considering the rise in infection in several Asian economies, which could cloud the recovery momentum.”
UOB expects both headline and core inflation to come in at 1 per cent this year.

Despite higher inflation, Barclays Bank economist Brian Tan said the MAS will likely keep its Singdollar policy unchanged at its next review in October.

“Any recovery could be quickly derailed if Covid-19 infections were to surge again. Recent discoveries of re-infections in a foreign-worker dormitory as well as the infection of a fully-vaccinated foreign worker will likely remind the MAS of the need for such caution,” said Mr Tan. 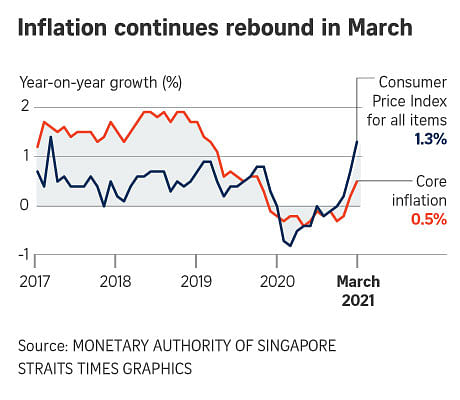