SINGAPORE - Overall manufacturing activity in Singapore expanded in March at the fastest pace in two years even as the electronics sector grew at a slower rate.

However, some industry players and analysts believe factory activity may have been capped last month, and may continue to suffer for some time to come, due to the week-long blockage of the Suez Canal that threw into disarray global supply chains. An estimated 60 per cent of the eastbound traffic through the Suez is bound for the Asia-Pacific region.

The Singapore Purchasing Managers' Index (PMI) rose for the ninth straight month, with expansion picking up by 0.3 points from the previous month to 50.8, according to data released on Monday (April 5).

This is the highest reading recorded since March 2019, when the PMI posted a similar reading of 50.8, said the Singapore Institute of Purchasing and Materials Management (SIPMM), which compiles the monthly PMI report.

A reading above 50 indicates expansion; one below indicates contraction.

The electronics sector remained in expansion territory for the eighth month in a row, but the pace slowed further to 50.6 - down 0.2 points from February.

Ms Sophia Poh, SIPMM's vice-president for industry engagement and development, said the outlook for PMI gains may have been clouded by the supply chain problems amid the disruptions caused by the Suez Canal blockage.

"Although the blockage has now been cleared, some manufacturers expect that the impact will last for several months," she noted.

The last ships stranded by the grounding of a giant container vessel in the Suez Canal passed through the waterway last Saturday, according to the Suez Canal Authority.

More than 400 vessels were stranded in the Mediterranean and the Red Sea when the giant container ship Ever Given became wedged across the vital waterway on March 23. It was freed on March 29 after rescue teams took almost a week to free it with extensive dredging and repeated tugging operations.

Ms Selena Ling, OCBC bank’s chief economist, and head of treasury research and strategy, said the Suez Canal blockage may have also exacerbated the semiconductor shortage - another supply disruption that may start to hurt companies such as Samsung, which has recently warned about how its vast line-up of consumer electronics could be affected.

Many automakers are already warning of the inability to source for chips and temporarily shut factories, she said.

She said that while the Suez blockage was more of a supply issue rather than one of waning demand, the new orders and new export orders’ gauges for the electronics PMI have also eased slightly in February even as they remain in expansion territory.

“Something I think one needs to keep an eye on would be the input price component, which has already ticked higher in February, since any ongoing supply chain problems, including the recent Suez Canal blockage, would only ramp up delivery costs and pressure margins unless manufacturers are able to pass on the higher costs to end-consumers,” she added. 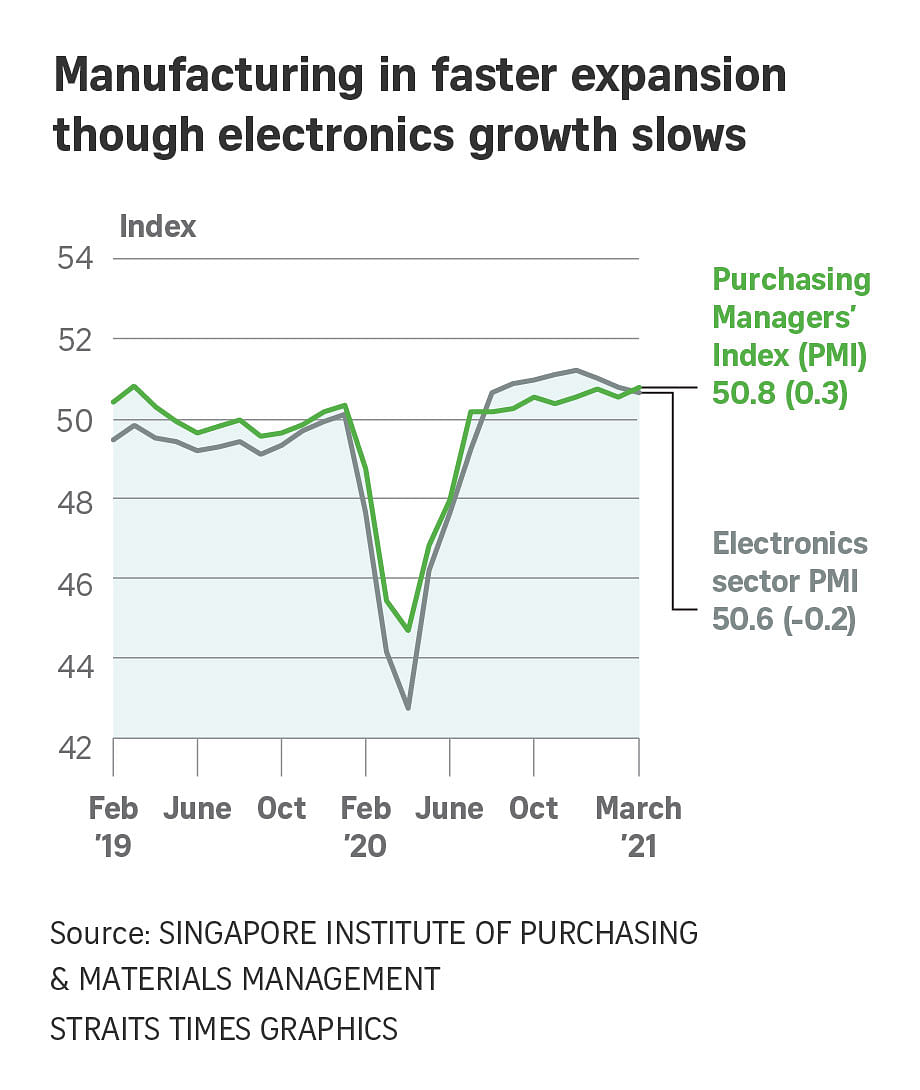 Figuring out the costs of Suez Canal blockage may take years

Still, higher expansion rates were recorded for the electronics sector in the indexes of finished goods stock, imports, input prices, and order backlog.

The electronics supplier deliveries index continued to expand for the third month, and the electronics order backlog index posted expansion for the ninth consecutive month.

Ms Ling said the near-term outlook for the manufacturing and electronics sector would depend on the severity of the global chip shortage.

It will also depend on the ability of Singapore companies to either capitalise on it and step up production or pass on the higher cost to their customers, she said.

She said her full-year 2021 manufacturing growth forecast remains at 4 per cent, which is a moderation from the 7.5 per cent growth recorded last year.

Still, electronics in general may continue to be a beneficiary of the demand for new technologies such as 5G products and solutions, she added.