CAIRO (BLOOMBERG) - Ships in the Suez Canal were being diverted to an older channel on Wednesday (March 24) after a large container ship ran aground, blocking vessels passing through one of the world’s most important waterways, maritime sources and companies involved said.

The 400m-long container ship Ever Given's hull became wedged lengthwise across the canal on Tuesday, causing a pile-up of at least 100 vessels seeking to transit between the Red Sea and the Mediterranean, according to ship brokers and mapping data compiled by Bloomberg.

No progress has been made so far in floating the vessel and clearing the canal, the Gulf Agency Company (GAC), which provides services including Suez transits, said by email.

The weight of the Ever Given – about 224,000 tons – and small size of the tug boats operated by canal authorities have hampered work so far, according to two people familiar with the situation, who asked not to be identified discussing private details. Ship owners are in talks with SMIT Salvage B.V., which has larger tugs, to assist, indicating that it may take days to clear the canal, one of the people said.

About 42 vessels either in the northbound convoy or arriving to transit the canal northbound are now waiting for the grounded vessel to be refloated, according to Leth Agencies. A further 64 vessels travelling southbound were also affected.

There was “a grounding incident” in the Suez Canal, said Mr Alok Roy, fleet director of BSM Hong Kong, the Ever Given’s ship manager. There have been no reported injuries or pollution, he said.

Taiwan’s Evergreen Marine Corp, which is leasing the vessel under a time charter, said the shipowner had informed the company that the ship “was suspected of being hit by a sudden strong wind, causing the hull to deviate from waterway and accidentally hit the bottom and run aground”. A “blackout” was the cause of the accident, GAC said, without providing more detail.

Ship tracking data showed the Ever Given still in the same position as at about 2am on Wednesday in Cairo. A spokesman for the Suez Canal Authority could not be reached for comment after midnight local time.

The Suez Canal is among the busiest waterways in the world, utilised by oil tankers shipping crude from the Middle East to Europe and North America.

While the vessel is likely to remain stuck only for a couple of days, the blockage is likely to send a ripple of disruption through the global oil supply chain.

European and United States refiners may be forced to look for replacement supplies should the blockage persist, potentially boosting prices of alternative grades. At the same time, flows of crude from North Sea fields destined for Asia will be held up.

Why is the Suez Canal so important?

While crude initially climbed on news of the grounding, broader signs of market weakness are keeping prices in check. Futures in New York slid below US$60 a barrel on Tuesday and have tumbled more than 12 per cent in less than two weeks on a series of factors including softening physical demand and the unwinding of long positions.

The prompt time spread for global Brent crude has also flipped into a bearish structure for the first time since January.

The canal is a crucial route, mainly used to transport Middle Eastern crude to Europe and the US, as well as shipping fuel oil from the west to the east. The canal can take fully laden Suezmax vessels that carry about one million barrels and bigger Very Large Crude Carriers, as long as they transfer some cargo out of the vessel before transiting.

On a daily basis, up to about 600,000 barrels of crude flow from the Middle East to Europe and the US via the canal, while volumes from the Atlantic Basin to Asia total about 850,000 barrels a day, according to Mr Anoop Singh, head of East of Suez tanker research at Braemar ACM Shipbroking.

Vessel charterers or owners who are unwilling to wait for the blockage to clear can opt to sail around South Africa, although that is a much longer route that would take more time and boost costs. 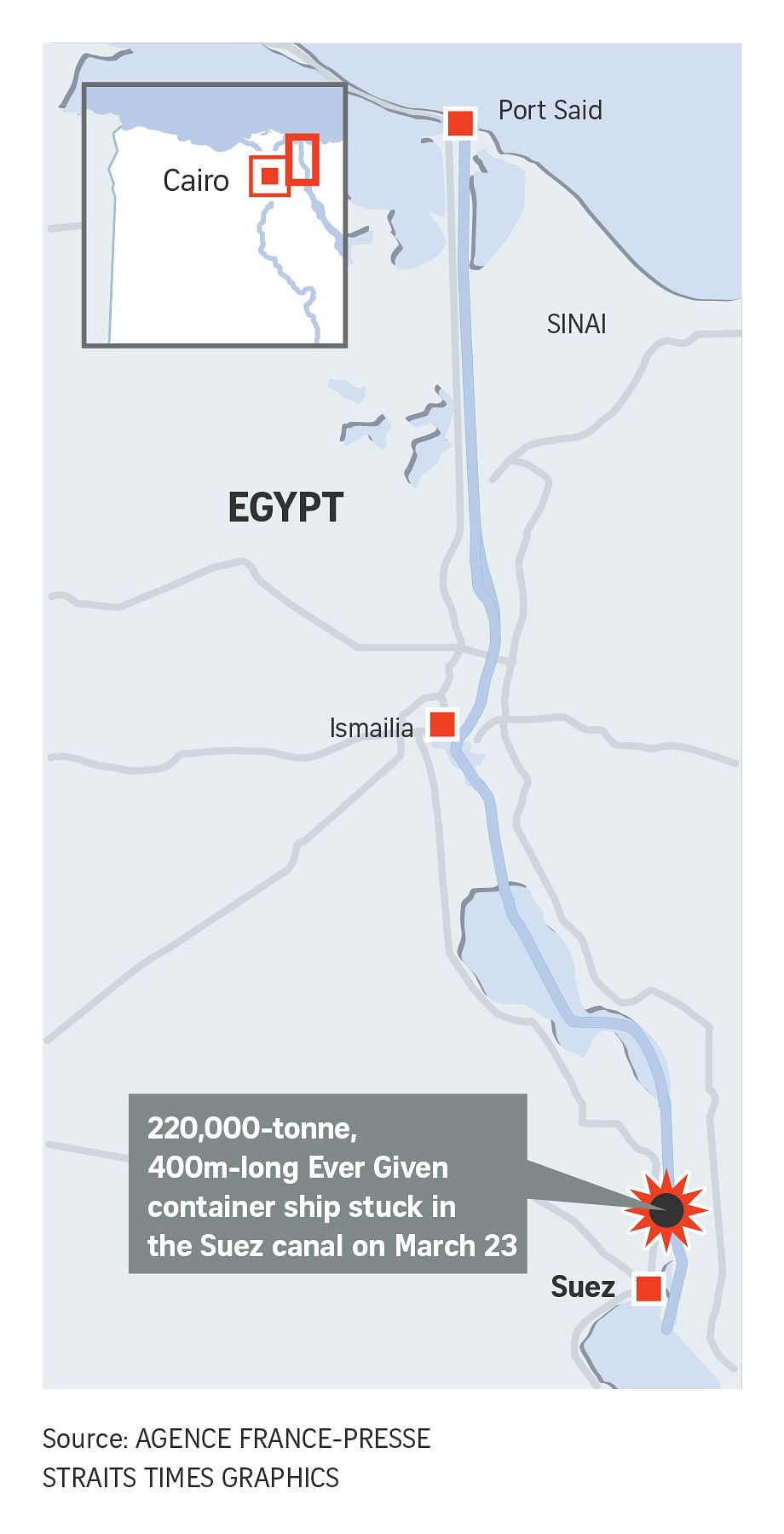