He spent some time addressing the current economic slowdown and giving help to those who continue to be displaced by economic transformation, but his overarching theme was preparing for the future.

He began his speech by harking back to the first Budget speech of 1965, and ended his two-hour address with a call for Singaporeans to contribute to the "Singapore story" for the next 1,000 years.

These are 11 announcements that stood out:

Overall, the 2016 Budget is expected to have a surplus of $3.4 billion.  This is possible because of the large Net Investment Returns Contribution (NIRC) expected - $14.7 billion. This is higher than the $9.9 billion of NIRC that came in to prop up Budget 2015. It is double the average NIRC of $7 billion to $8 billion from FY 2009 to 2013. One reason is that Temasek has been added to the NIRC framework. Deputy Editor Ignatius Low and Opinion Editor Chua Mui Hoong give their analyses in our blog. 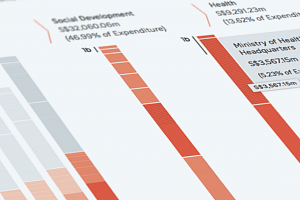 Balancing the Budget: Revenue & expenditure for 2016

Small businesses will get a higher corporate income tax rebate, help to secure loans, and an extension of the special employment credit scheme.

The struggling marine and process sectors (but not other sectors) will get a reprieve from foreign worker levy hikes, while neighbourhood shops will have help for promotional activities and upgrading projects.

No one expected programmes that will top the SkillsFuture scheme already announced in 2015, but there was some help for low-wage workers and those with disabilities.

Workfare was enhanced, and training opportunities for people with disabilities will be provided under the Workfare Training Support Scheme.

4. Stress on innovation, robotics and growth

A raft of schemes to promote automation, the use of robots and internationalisation were introduced or enhanced. Indeed, ensuring SMEs "scale up" was a major thrust of the Budget.

Measures include an Automation Support Package, tax incentives, support from IE Singapore to expand overseas, and new platforms to apply for government grants and facilitate collaboration in the trade and logistics sector. Grants for innovation and to adopt new technologies were also announced.

A new Jurong Innovation District will be built in Jurong West by 2022, bringing together researchers, students, innovators and businesses to develop new products and services.

Parents of Singaporean babies born from Thursday (March 24) onwards will get $3,000 up front in their child's Child Development Account (CDA) under the new First Step Grant. Parents will not have to contribute anything first to get that amount.

The $3,000 will count towards the existing caps, meaning first-time parents who receive the grant and then save $3,000 to their child's CDA will hit the $6,000 co-savings ceiling.

However, while children born from Thursday are eligible, the money will be deposited only from July 1, when necessary updates to systems are completed.

In addition, it was announced that a grant of $35,000 will be given to families with young children in rental housing to buy a new two-room flat with a shorter lease under the Fresh Start Housing Scheme.

This is the name of a pilot initiative that will help parents pay for development programmes for their child up to the age of six. About 1,000 children are expected to benefit from the $20 million programme. Research shows that a child's early life experiences significantly influence their physical, cognitive and social development, Mr Heng said.

Seniors in the low-income groups will get their first payouts.

Those who are in the bottom 30 per cent of 65 and above can get between $300 and $750 each quarter to supplement their retirement incomes. There will be a double payout in July 2016, for two quarters, and it will be made automatically. More than 140,000 seniors will stand to benefit from the permanent scheme, which Mr Heng called a "major new feature" in Singapore's social security system.

10. Some help for households

While there were fewer handouts than last year, top-ups to GST vouchers and Service & Conservancy Charges (S&CC) rebates continue. In addition to the $150 to $300 cash given to those eligible, there is a one-off payment of $100 to $200. Households can get one to three months in S&CC rebates as well as U-Save subsidies for their utilities bills.

A new Outward Bound Singapore (OBS) camp will be built on Coney Island by around 2020. Mr Heng said: "To thrive, our young people need a sense of adventure, resilience, and be ready to challenge themselves to be their best."