The Trump administration on Thursday is due to impose its latest round of punitive tariffs on China, putting 25 per cent duties on another US$16 billion in imports, with Beijing poised to retaliate dollar-for-dollar.

The twice-yearly survey by the National Association for Business Economics (NABE) also found respondents were split on December's sweeping tax cuts, but agreed Congress should do more to shrink the expanding budget deficit.

NABE Vice President Kevin Swift said more than 90 per cent of the 251 economists surveyed said the tariffs and threats of tariffs had "unfavorable consequential impacts."

Washington, Ottawa and Mexico City began talks a year ago to revise the 24-year-old trade pact, which Trump has threatened to scrap should negotiators fail to reach an acceptable deal. Officials have become more optimistic in recent days that they could finalise a Nafta rewrite by the end of the year.

Some companies across the United States have blamed the tariffs for layoffs, squeezed profit margins and possible bankruptcies. Lawmakers in Trump's own Republican party have expressed outrage about the multi-front trade conflicts and warned of long-term damage to the economy.

But White House officials say the American economy is more than robust enough to endure the conflict, which they believe will ultimately result in more equitable trade that reduces the US trade deficit. 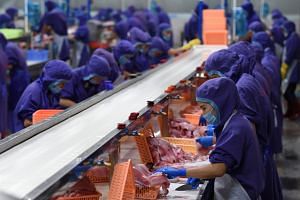 A majority of those surveyed by NABE approved of December's corporate tax reductions but only a small share favored the changes for individuals, which Democrats have criticized as unduly favorable to the wealthy.

More than 80 per cent believed current fiscal policy would expand the budget deficit as a share of GDP, and agreed Congress should work to reduce it.

Large majorities also favored fighting climate change and combating income inequality but were split on how to achieve the latter goal, according to the report.

According to the latest NABE survey, 60 per cent of respondents believed economic policy should do more to combat climate change.

In addition, 74 per cent said economic policy should do more to combat income inequality but respondents were divided on the best means of doing this: 47 per cent supported more education to improve worker productivity, while 33 percent favored more progressive taxation.