HONG KONG (REUTERS) - Factory activity contracted in most Asian countries last month as an escalating trade war between Washington and Beijing raised fears of a global economic downturn and heaped pressure on policymakers in the region and beyond to roll out more stimulus.

Such growth indicators are likely to deteriorate further in coming months as higher trade tariffs take their toll on global commerce and further dent business and consumer sentiment leading to job losses and delays in investment decisions.

Some economists predict a world recession and a renewed race to the bottom on interest rates if trade tensions fail to ease at a Group of 20 summit in Osaka, Japan at the end of June, when presidents Donald Trump and Xi Jinping could meet.

In China, Asia's economic heartbeat, the Caixin/Markit Manufacturing Purchasing Managers' Index (PMI) released on Monday (June 3) showed only modest expansion at 50.2, but output growth slipped, factory prices stalled and businesses were the least optimistic on production since the survey series began in April 2012.

An official gauge on factory activity on Friday, which analysts say reaches a broader spectrum of participants, was in contraction as both domestic and external demand slackened.

PMIs were below the 50-point mark separating contraction from expansion in Japan, South Korea, Malaysia and Taiwan, came below expectations in Vietnam and improved slightly in the Philippines.

"The additional shock from the escalated trade tensions is not going to be good for global trade and if demand in the US, China and Europe continues to soften, which is very likely, it will bode ill for Asia as a whole," said Aidan Yao, senior emerging markets economist at AXA Investment Managers. 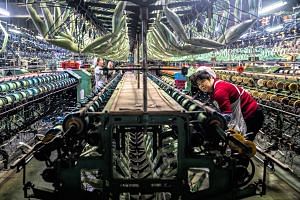 "In terms of the monetary policy response, almost everywhere the race is going to be to the downside."

Central banks in Australia and India are expected to cut rates this week, with others around the world seen following suit in coming weeks and months.

Euro zone activity is expected to shrink as well, while US manufacturing is expected to grow steadily, although economists expect the global malaise to eventually feed back into the US economy. Fed funds rate futures are now almost fully pricing in a rate cut by September, with about 50 per cent chance of a move by July 30-31.

JP Morgan expects the Federal Reserve to cut rates twice this year, a major change from its previous forecast that rates will stay on hold until the end of 2020.

India, one of the world's leaders in terms of growth, will publish PMI data later on Monday. On Friday, data showed the economy growing at its slowest pace in more than four years in January-March.

The trade conflict between China and the United States suddenly escalated last month when US President Donald Trump raised tariffs on hundreds of billions of Chinese imports to 25 per cent from 10 per cent and threatened levies on all Chinese goods.

If that were to happen, and China were to retaliate, "we could end up in a (global) recession in three quarters," says Chetan Ahya, global head of economics at Morgan Stanley.

Over the weekend tensions flared again, with the two countries clashing over trade, technology and security.

China's Defence Minister Wei Fenghe warned the United States not to meddle in security disputes over Taiwan and the South China Sea, while acting US Defence Secretary Patrick Shanahan said Washington would no longer "tiptoe" around Chinese behaviour in Asia.

On Friday, China also threatened to unveil an unprecedented hit-list of "unreliable" foreign firms, groups and individuals that harm the interests of Chinese companies. That came after Washington last month put Huawei on a blacklist that effectively blocks US firms from doing business with the Chinese telecoms equipment giant.

"We take this seriously. It means that the trade war has not only become a technology war but also a broad-based business war. There will be more retaliation actions from China, especially for the technology sector," said Iris Pang, Greater China economist at ING.

"On military war with respect to Taiwan, we believe that this is a bit distant. But we are not dismissing the warnings of war out of hand."

Washington's new tariff threats against Mexico last week also contributed to global recession fears, with stock markets tumbling around the world. The 10-year US Treasuries yield fell to 2.121 per cent, a nadir last seen in September 2017.

South Korea's exports - seen as a bellwether of world growth - fell 9.4 per cent in May, worse than a median forecast for a 5.6 per cent decline, data showed on Saturday.

"Investors may need to accept that the US is comfortable fighting a trade war on many fronts," said JP Morgan Asset Management Global Market Strategist Hannah Anderson.