SINGAPORE - Removing the worn coating from the engine fan case of an aircraft used to take around two days when done by hand but, since last December, a robot has taken over the task at ST Engineering Aerospace - and it can complete the job in about a day.

Such efforts in automation, along with a training council the company set up to help equip workers with skills needed for future jobs, make it a good role model for others, said Finance Minister Heng Swee Keat on Monday (Feb 25).

"ST Engineering is among the first few companies in Singapore to set up an in-house training council, to work more closely together with the National Trades Union Congress (NTUC) and to look at the training of their workers," said Mr Heng on the sidelines of a visit to the aerospace facility in Airport Road.

"I hope that many more companies will embark on this... because I think it's important for us to devote time, attention and resources to the upgrading of our workers," he added.

Mr Heng's comments come a week after he delivered the Budget, which included a $4.6 billion investment to boost businesses and support Singaporean workers over the next three years.

Of this amount, $3.6 billion will be used to assist workers during industrial disruptions while $1 billion will help firms to grow their deep enterprise capabilities.

While Mr Heng said he has heard fairly positive comments on the Budget, given that it covers a range of issues from security to economic transformation, he acknowledged that "there are some sectors which will be facing more stress".

In particular, this applies to sectors which are more manpower intensive.

"We will need to continue to work closely together with our trade associations, with our unions, so that we can make this major transition," he said. He added that "precisely because it is not easy, we need to devote even more time and effort to doing this".

"As I said in the Budget, if we do not change, then we will be hitting a dead end... It is far better for us to take the slightly more difficult road today, so that we will reach our destination," he said.

Mr Heng flagged the need to focus on solutions as well, and consider positive examples of what companies can do to cope with change, such as in the case of ST Engineering. 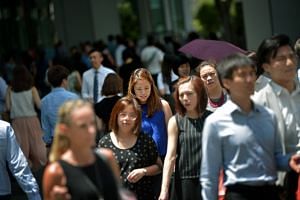 $4.6 billion over next 3 years committed to building business capabilities and helping workers

Economic spending cut, but businesses have reasons for cheer with Budget

Getting the conditions right for older workers

Mr Jeffrey Lam, deputy president of ST Engineering Aerospace, said on Monday that the company has been putting more money in technology to support its workforce - spending up to 20 per cent more on investment in technology and engineering development over the past five years.

This is in part due to customers' rising expectations of higher productivity and better goods, but also because of an ageing workforce. More than half of its 9,000 or so employees are aged above 45, said Mr Lam.

He added: "The workforce in Singapore is ageing and, in addition, we also have a shortage of labour supply... As a result, we need to invest in technology that will enable us to automate and be more productive."

With the help of new technology, the company has managed to reduce turnaround time for processes by 20 to 50 per cent, he said. It could also improve quality and reduce errors by at least 20 per cent.

Apart from having a robot help remove a worn layer from aircraft, it has also implemented an electronic documentation system that shows the real-time status of all ongoing maintenance work. This was put in place in November 2017, reducing the administrative burden on technicians.

Looking ahead, the company is testing the use of a drone to visually inspect the exteriors of aircraft, doing away with the need for engineers to climb up and down fixtures.

"We will invest in almost all areas to move to (a paperless workflow), to moving our work to mobile devices," said Mr Lam. This could allow workers around the world to exchange information as well from the ground, through their portable devices.