SINGAPORE - Singapore is not expecting a full-year recession at this point, although economic growth slowed to its lowest in a decade in the second quarter, Deputy Prime Minister Heng Swee Keat said on Friday (July 12).

There remain areas of strength in the economy, he added in a Facebook post, noting that these include the information and communications sector, as well as the construction sector.

Mr Heng, who is also Finance Minister, said the latest flash estimates for Singapore's gross domestic product released on Friday morning reflect heightened uncertainties and risks in the global economy, especially with trade tensions between the United States and China.

But the Republic is prepared for the cycles the economy will go through and must continue to focus on the medium and long term, even as it tackles short-term challenges and helps those affected, he said.

"The Government is monitoring the situation closely, and is working with employers and unions to prepare for all scenarios," he added.

"The Future Economy Council will continue with our industry transformation plans, build stronger enterprise capabilities, and make the most of the opportunities around us," said Mr Heng, who also chairs the council tasked with charting and driving the transformation of Singapore's economy.

On Friday, two ministers also said that businesses and workers in weakened sectors will get help to adjust to new realities, and the focus has to be on preparing for the long term.

Trade and Industry Minister Chan Chun Sing said in a Facebook post that the Republic is dealing with longer-term shifts in supply chains and production patterns, and its strategy is not to artificially boost demand in general.

Rather, it will surgically help companies and workers adjust to new realities.

"We must therefore focus on our long-term fundamentals of building real and new capabilities, expanding into new markets and acquiring new skills," he said. "The Government will continue to help our businesses transform their businesses and workers acquire new skills to keep pace with the changes."

In a separate Facebook post, Manpower Minister Josephine Teo noted there are still around 60,000 unfilled vacancies, half of them for professionals, managers, executives and technicians (PMETs) in sectors like financial services, professional services and infocomm technology.

New and better jobs continue to emerge, and there is no shortage of programmes to support the transition for workers who are willing, she added.

Their comments come as the latest Ministry of Trade and Industry flash estimate showed Singapore's economy grew 0.1 per cent year on year in the second quarter, and shrank by 3.4 per cent on a quarter-on-quarter basis. This has prompted economists to warn of a heightened possibility of a technical recession - two consecutive quarters of slowdown.

In his post, Mr Chan said the current challenges are different from those of the 1997 Asian Financial Crisis and the 2008 Global Financial Crisis, when a sudden loss of confidence in global financial markets triggered a sharp downturn in the Singapore economy. 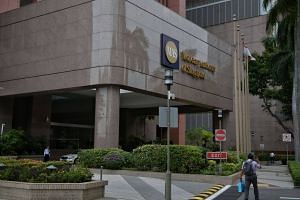 S'pore's economy grows just 0.1% in Q2, lowest in decade and worse than expected

As trade is three times Singapore's gross domestic product, its economy will be subject to uncertainties of the global investment climate, as well as shifts in global supply chains brought about by the turbulent international trade environment, the minister added.

In particular, sectors such as electronics, precision engineering and wholesale trade have weakened and will need to adjust.

Meanwhile, other areas like information and communications, as well as education, health and social services continue to hold up well.

"While not all the shifts in production and trade flows may come our way in the short term, we are focused on attracting high quality investments for the long term," he said.

"Our investment pipeline gives us confidence that we are on the right track," he added.

"Companies looking for a stable political environment, pro-business ecosystem, skilled workforce, progressive regulations, superior connectivity and rule of law, still see Singapore as an attractive destination. The significant investments announced this year by ExxonMobil, Linde, GSK, Dyson and the two Integrated Resorts, among others, are testament to our strong fundamentals," he said.

"However, we must not be complacent. The competition is tough. Other countries are also upgrading themselves to seize new opportunities. Singapore and Singaporeans must do so similarly, and act faster than the rest."

In spite of near-term headwinds, he added, the country remains confident that its fundamentals will help it ride through the current challenges, while creating the conditions for longer-term success.

"Let us work together to weather this storm, and emerge stronger when the skies clear," he said.

Mrs Teo, in her post, noted that even as professionals, executives, business leaders and union leaders pay close attention to slowing economic growth, they are not in a state of panic.

"Most of them know that it is in the nature of business cycles," she said, adding that some systematically prepare for such times and become more flexible in the way they think and act when necessary.

For example, job seekers may keep themselves updated on industry trends and expand their network of contacts. They may also consider roles that they might have looked past previously, she said.

On the unfilled vacancies, she noted that some of the most sought-after PMETs include software/web developers, systems analysts and managers in business development, sales and marketing. They can expect to earn minimally between $4,000 and $5,000, she added.

And as foreign workforce quotas are tightened in the services sector, there are employers looking to hire more as well, even as they restructure to become more manpower-lean, she said.

"Taking up these jobs may require training or adjustments in salary expectations," she said. "For those who are willing, there's no shortage of programmes to support their transition."

Mrs Teo pointed to the more than 100 Professional Conversion Programmes in over 30 sectors, and Career Trial to help both employers and job seekers give each other a chance to see whether they are suitable for new jobs.

Workforce Singapore has also helped about 76,000 people move into new jobs through the Adapt and Grow initiative from 2016 to 2018, she added.

"We are ready whenever more employment support is needed."