SINGAPORE (THE BUSINESS TIMES) - Singapore's liquefied natural gas (LNG) terminal has completed a recent expansion and now has enough capacity to meet the city-state's total gas demand, even if it were to stop importing natural gas through pipes.

The five-year-old terminal is also retooling itself in various ways to serve the evolving LNG market, ahead of an anticipated take-off in LNG trading, bunkering, and small-scale LNG businesses, says its head honcho.

Singapore LNG Corporation (SLNG) chief executive John Ng told The Business Times in a recent interview that the terminal completed its third phase of expansion of its regasification facilities last September, bringing its regasification capacity from six to 11 million tonnes.

The amount of natural gas Singapore now consumes is equivalent to about nine million tonnes of LNG a year.

Some 77 per cent of Singapore's natural gas demand is currently piped in from Malaysia and Indonesia. The six contracts for these expire between this year and 2029, and it is not yet clear whether they will be renewed.

"If piped natural gas is not renewed and we need to replace (gas supply) our terminal is capable of doing that," said Mr Ng.

"Meanwhile if there is any technical issue (with piped natural gas) the LNG terminal is also capable of supporting the security of supply from that perspective as well."

SLNG has three storage tanks with about 540,000 cubic metres in capacity. These are fully utilised by its regasification customers as well as those tapping its storage and reload services - mainly traders which bring in cargoes for storage and reload them onto another vessel at the appropriate time.

The terminal is now building a fourth storage tank with a capacity of 260,000 cubic metres. This will be completed in the second or third quarter of this year. SLNG is looking for customers to use the fourth tank, and sees market interest from LNG traders, said Mr Ng.

At the same time, the terminal's jetties are well used too because they serve ships performing various functions.

Besides customers conducting regasification and those using its storage and reload services, SLNG is active in performing cool-down services, said Mr Ng. This involves helping LNG ships, whether newly built or repaired, to cool down their tanks before they load their LNG cargos; they make use of free berthing slots at the jetties.

The terminal handled 54 vessels last year, comprising 31 which made use of its regasification throughput services, and 23 for its ancillary services.

SLNG is currently modifying its secondary jetty - initially designed for vessels from 60,000-265,000 cubic metres in size - to accommodate smaller ships of 2,000 to 10,000 cubic metres, so as to better ride on growth of small-scale LNG in future. This is expected to be completed next year.

"Such an undertaking is to signal to the market that we are prepared to spend money to develop this small- scale LNG business," said Mr Ng. He declined to reveal how much the firm is spending on the modification.

He expects such small vessels to be used in two ways: one is to send LNG into the region after breakbulking, and the other is for ship-to-ship LNG bunkering.

While there are not many LNG- fuelled vessels at the moment, Mr Ng believes that will change in the future with the International Maritime Organisation imposing a 0.5 per cent sulphur cap for marine fuels by 2020.

SLNG marked a number of milestones last year. In April, it launched its first LNG trucking facility - significant because it enables the development of LNG trucking and truckto-ship bunkering businesses in Singapore.

The firm has a masterplan to develop another four LNG trucking bays in future, but how fast these are built depends on demand, said Mr Ng.

In June, the terminal successfully carried out its first cool-down and reload of a small-scale 6,500 cubic-metre vessel, demonstrating its ability to handle small-scale vessels even before the modifications to its secondary jetty.

In August, it gave Pavilion Gas rights to use storage tank capacity for storage and reload services for two years. 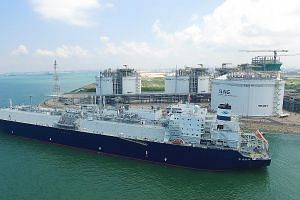 In December, it carried out its first jetty-to-jetty LNG transfer - believed to be the first in South-east Asia.

"This offers (traders) greater flexibility, allowing them to capture trading opportunities that may be more time sensitive in nature."

Pavilion Gas, which contracted the cargo that was unloaded in the jetty-to-jetty transfer, said such services will add value to Singapore's offerings as an LNG hub. It also conducted another such transfer on Jan 21.

SLNG is also building a nitrogen blending facility to provide its customers more flexibility; this will be completed in the second or third quarter of this year, too.

"It allows customers to bring in richer gas so that we can store it and blend it down to the right levels," Mr Ng explained.

"It gives a lot more commercial viability to these customers."

Even as the terminal develops its ancillary services, regasification will remain SLNG's primary business and focus because it is about Singapore's energy security, said Mr Ng.

"We will be putting in more effort to make sure that the security of supply is not only available, but also highly reliable."