SEATTLE (BLOOMBERG) - Qualcomm Inc seems to have escaped the clutches of would-be acquirer Broadcom. Now, the chipmaker will have to deliver on the promises it made to shareholders as it fought to remain independent.

US President Donald Trump late Monday issued an executive order blocking Singapore-based Broadcom from acquiring Qualcomm, most likely scuttling the US$117 billion (S$154 billion) deal that the San Diego company has been staunchly fighting since November. Yet the unsolicited takeover bid was just the most immediate in a long list of challenges for Qualcomm, which also include legal disputes with customer Apple, a decline in profit and a regulatory assault on its licensing business, all of which have eroded faith in chief executive officer Steve Mollenkopf.

As Broadcom sought to elect its own slate of directors to Qualcomm's board, the run-up to an aborted shareholder meeting made clear how dissatisfied investors have become with Mollenkopf. The final tally on Broadcom's nominees was postponed by US government order, but an initial count of more than half the votes cast showed Mollenkopf getting the second-lowest number of votes among the nominees for the board. That would have seen him losing his director seat. The initial voting also showed Broadcom on course to win all six board slots it was seeking. While Trump's order bars Broadcom's nominees from remaining on the slate, Qualcomm can't ignore the signal investors sent when the voting was open to alternatives.

"We'll have to see if management change is in the offing - it looks like investor confidence in management is low," said Stacy Rasgon, an analyst at Sanford C Bernstein.

Qualcomm's management and board will face shareholders at a reconvened meeting on March 23, the company said late Monday.

Even if Mollenkopf keeps his job, he now must turn back to the task of jump-starting sales and rebuilding strength in the company's licensing business. Mollenkopf and Paul Jacobs - a former CEO who had been executive chairman until last week, when Qualcomm downgraded his role - are both engineers who focused on the company's technological prowess to drive its growth. As it fended off Broadcom's hostile advances, Qualcomm asked shareholders to have confidence in its strategy to grow by investing in new technology and moving into new businesses. Qualcomm is taking on Intel Corp in the markets for processors used in laptops and server computers, seeking to dominate in the next generation of wireless devices and spread the use of its chips into newly connected hardware such as cars.

The company, the biggest maker of phone-modem chips, is also trying to complete the US$47 billion acquisition of NXP Semiconductors NV, a seller of chips to automotive and industrial companies. It's been working for more than a year to close that deal, which Qualcomm says is key to entering new, fast-growing markets. 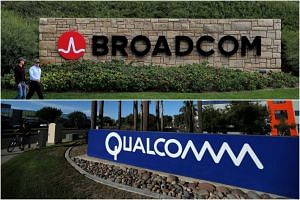 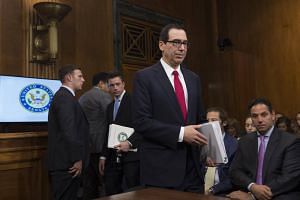 CFIUS: The powerful and unseen US gatekeeper on multi-billion-dollar deals

As Qualcomm proceeds on its own, reaching those goals is far from assured, no matter how much the company invests in research and development. Qualcomm is being hurt by weakening demand for smartphones and the company's profit-generating licensing unit has been hit with regulatory fines around the world and a challenge from Apple, one of its largest customers, which has stopped paying up as the two prepare to battle in the courts.

Shares of Qualcomm, which got a boost in recent months from Broadcom's pursuit as investors anticipated the possibility of a higher bid, slipped 4.5 per cent in extended trading after Trump announced he would block the deal. For its part, Broadcom said it's reviewing the order and strongly disagrees that the deal raises national-security concerns.

Qualcomm is unique in the semiconductor industry because it gets the majority of its profit from licensing technology. While chips that connect phones to networks and run programs on smartphones generate the majority of its sales, patents on inventions that cover the fundamentals of all modern phone systems let Qualcomm collect highly profitable fees from phonemakers.

Yet that business model has come under intense scrutiny in recent years. Regulators from South Korea, Taiwan, Europe and China have levied fines on Qualcomm, alleging it abused its dominant market position. The US government is also investigating. The dispute with Apple, which has accused Qualcomm of illegally leveraging its position in phone chips, is costing Qualcomm about US$2 billion a year.

The US government action to block Broadcom's bid removes just one existential threat from Qualcomm's future. It does nothing to fix the others.