SINGAPORE - An OCBC Securities remisier said during the ongoing penny stocks trial on Friday (March 29) that market information shared between brokers and clients could push up share prices, and conceded under cross-examination that he had front-run instructions from one of the accused.

Remisier Ng Kit Kiat, a prosecution witness, has told the court that he took instructions from defendants John Soh Chee Wen and Quah Su-Ling on trades of Blumont Group, Asiasons Capital (now Attilan Group) and LionGold Corp. On Friday, the fourth day of the joint trial of the two defendants, he took questions from Quah's lawyer, Philip Fong of Eversheds Harry Elias.

Mr Fong, whose client faces charges of market manipulation and deception, placed the spotlight on the flow of information in the market. Under questioning, Mr Ng agreed with Mr Fong that brokers share market information with one another as well as with clients, and that such activity could push up the price of a counter.

Mr Ng also conceded that he had placed trades for his wife after he received trading instructions from Quah, but before executing the orders that Quah had requested. Mr Fong drew out that concession after presenting Mr Ng, who initially denied front-running, with two instances in 2013 when Mr Ng had placed orders through his wife's account ahead of similar orders for other accounts that the prosecution said were improperly controlled by Soh and Quah.

Mr Ng testified that Quah would sometimes instruct him to hold back trade orders for a while, this explained why her trade was not keyed in immediately. However, Mr Fong pressed him: "But the whole point is after Quah Su-Ling had given you instructions, you keyed in your wife's order first."

Mr Fong: "Do you agree you were front-running in this case?" 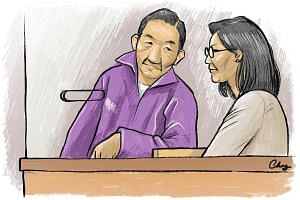 Mr Ng is the first prosecution witness to take the stand in the trial, which is the culmination of investigations into the circumstances that led to the October 2013 collapse in the shares of Blumont, Asiasons and LionGold (collective known as BAL). Prosecutors allege that Soh and Quah controlled a web of 189 accounts to manipulate the market for the BAL counters, and used intermediaries and brokers like Mr Ng to operate the scheme.

A third defendant, Goh Hin Calm, has pleaded guilty to aiding and abetting the alleged scheme as a book-keeper for Soh and Quah.