SINGAPORE - Malaysian businessman John Soh and alleged co-conspirator Quah Su-Ling pleaded not guilty to 189 charges and 178 charges respectively in the first day of their trial for the 2013 penny stock crash, which wiped out $8 billion from the Singapore market.

Prosecutors on Monday (March 25) outlined how Soh, 59, the alleged mastermind, and girlfriend Quah, 54, the former Ipco International chief executive, allegedly exploited family, friends and business associates to manipulate the share prices of Blumont Group, Asiasons Capital (now Attilan Group) and LionGold Group - collectively known as BAL.  The stocks surged by at least 800 per cent over nine months before they plunged during three days in October 2013.

“This is a prosecution for the most serious case of stock market manipulation in Singapore,” Deputy Public Prosecutor Peter Koy, who leads a seven-strong prosecution team, said in an opening statement that lasted almost two hours.

On Wednesday, the third figure in the case, former Ipco interim CEO Goh Hin Calm, pleaded guilty to two of six charges of aiding and abetting Soh and Quah. Goh, 59, described as a "treasurer" in the operation, was sentenced to jail terms of three years for each of those charges, which will run concurrently.

According to prosecutors, Soh and Quah controlled a total of 189 accounts held in the names of 60 individuals and companies at 20 financial institutions, including local and foreign brokerages, as well as international banks.

Soh, an undischarged bankrupt, and Quah have been acquainted since 2002. At the time of the offences, they were in an intimate relationship, said prosecutors. 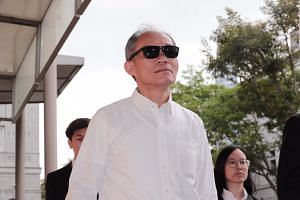 The pair allegedly drew on personal and business relationships to control trading accounts belonging to family, friends, associates and companies related to them. They included Soh's brother, brothers-in-law, the wife of one of his brothers-in-law and both of Soh's sons. Soh also controlled trading accounts belonging to a "romantic partner", Ms Adeline Cheng Jo-Ee, as well as two companies owned by her and her father.

Accounts belonging to Quah's mother, her brother-in-law and Goh Hin Calm's wife were also part of the web.

In total, Soh and Quah controlled 33 accounts from this group of controlled account holders.

The web of controlled accounts also included accounts in the names of companies that were related to Quah and/or Goh; accounts held by senior management, major shareholders and subsidiaries of BAL; and, those held by Soh's associates and companies the associates controlled.

In addition, Quah had 16 trading accounts in her own name and Goh had six, but Soh did not hold any in his own name.

Soh, as an undischarged bankrupt, was not allowed to be concerned in the management of a company without permission from the Official Assignee. But prosecutors said the evidence will show that beyond the extensive manipulation scheme operated in the market for BAL shares, Soh was also involved in the corporate affairs of the three companies.

As investigators closed in, Soh sought to hide his and Quah's involvement in the scheme by tampering with no less than four witnesses, prosecutors said.

During the period of the charges, Soh and Quah were responsible for carrying out wash trades in more than 353 million Blumont shares, 1.6 billion Asiasons shares and 2.4 billion Liongold shares, said prosecutors.

Another way the scheme was funded was by deceiving financial institutions (FIs) into extending share financing to the controlled accounts. This was done by offering BAL shares as collateral which the FIs accepted, not knowing that the trading volume and price of BAL shares had been manipulated and were false.