SINGAPORE (BLOOMBERG) - Undeterred by a hack that exposed personal information on 9.4 million passengers, Cathay Pacific Airways is doubling down on mining customer data.

The airline is logging the travel habits of lucrative business-class flyers, such as when they want their seat laid flat, in a bid to tailor flights for them, chief executive officer Rupert Hogg said in an interview in Singapore on Monday (March 18). The Hong Kong flagship carrier plans to introduce a new product in its business-class cabin in the second half, he said, without offering details.

The data analysis is helping Cathay "understand what people like and what they don't like", Hogg said. "It's everything that will make that journey comfortable."

The efforts are part of Cathay's three-year transformation programme started in 2017 when Hogg assumed the top post. The carrier is seeking to strengthen its financial health after taking a beating from competition from China to the Middle East.

Mining client data enables precision and is what any consumer company is doing, according to aviation analyst Mohshin Aziz of Maybank Investment Bank Bhd. "By doing this correctly, you can have repeat customers," said Mohshin.

Cathay's recent security breach shouldn't affect the company's analysis, Mohshin said. The airline was the target of a sophisticated hack on its computer system last year, the largest such violation in the airline industry.

After cutting jobs and slimming down its operating structure, the airline posted its first full-year profit in 2018 following two straight annual losses. As part of the overhaul, the carrier also added international routes and lured customers with improved service offerings and meals for premium fliers. 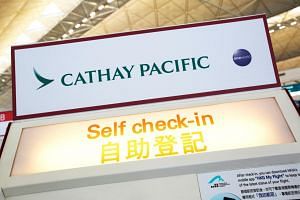 Echoing the passenger reach of rival Singapore Airlines Ltd, whose operations range from budget to premium customers, Cathay has also changed its view about the low-cost-carrier business. Operating a budget airline was something that Hogg ruled out two years ago at the start of the transformation programme.

"It's a unique segment to the market," Mr Hogg said in a Bloomberg Television interview with Yvonne Mann and Rishaad Salamat on Monday. "It's a stimulatory type of model and it's changed a lot."

The airline said this month that it's in "active discussions" to buy shares in Hong Kong's only budget carrier from debt-laden Chinese conglomerate HNA Group Co. A successful acquisition of Hong Kong Express Airways Ltd would fill a hole in Cathay's product offering, according to Rahul Kapoor and Chris Muckensturm, analysts at Bloomberg Intelligence.

Cathay has added 31 of the more fuel-efficient Airbus SE A350s to help start new destinations, and has also cut its overall fuel consumption, Hogg said. The carrier is making Wi-Fi available on its widebodies used for long-haul flights by 2020, and thereafter on its narrow-body aircraft operated by its Cathay Dragon unit.

"We're really focused on productivity rather than cost cutting because productivity is about doing things smarter," the executive said.

As for concerns following two fatal crashes involving Boeing Co's 737 Max aircraft, which Cathay's fleet doesn't include, Mr Hogg said safety has always been the first priority for the industry and always will be. It also operates 777s and ordered the 777-9X from the US planemaker.

"It's important that people get to the root cause, really understand it, and then we learn from that and the whole industry learns," he said.