SINGAPORE - Business at Mr Terence Yow's shoe stores plunged by up to half in May, when Singapore tightened safe management measures after several Covid-19 infection clusters emerged.

They took a clobbering again two months later, when the Republic returned to phase two (heightened alert) to stem the spike in community cases following the discovery of clusters linked to Jurong Fishery Port.

Mr Yow, the managing director of shoe retailer Enviably Me, said the group was financially worse off during this period compared with the circuit breaker last year, even though business fell to zero then.

This was because rental rebates and the Jobs Support Scheme of wage subsidies were much higher during the circuit breaker, he told The Straits Times.

So he was relieved when the Government announced last week that over 38,400 tenants and owner-occupiers would get their first Rental Support Scheme (RSS) payouts directly from the Government from last Friday (Aug 6), without going through landlords.

"When rebates are passed through landlords, they can be subject to dispute between tenants and landlords on the actual amount. This can cause more delays and friction," he said, adding the sticking point is some landlords' reluctance to extend help unless mandated by the Government.

"RSS has been very helpful to our company during this extended period of crisis. We are happy that RSS will be directly credited to our accounts, and are grateful to the Government for extending this much-needed help."

The top three sectors getting RSS payouts are retail, food and beverage, and personal services such as hair and beauty salons. Together, these sectors benefit from around half of the total payouts.

Last Thursday, the Inland Revenue Authority of Singapore (Iras) and Ministry of Finance (MOF) said that the first round of payouts totals $216 million and comes ahead of schedule by two weeks.

MOF had earlier announced that rental relief will be offered to small and medium-sized enterprises (SMEs), as well as non-profit organisations with an annual revenue of not more than $100 million, that are tenants of qualifying commercial properties.

The measure was part of more than $2 billion in support announced by Finance Minister Lawrence Wong for workers and businesses grappling with the impact of tighter Covid-19 restrictions since May.

Some restrictions were loosened on Aug 10, with dining in allowed at all eateries with certain conditions.

Other changes to community measures, such as caps on group sizes, were also announced last Friday by the Ministry of Health, with some taking place from Aug 19.

This first round of RSS payouts is equivalent to half a month of rent for the period of May 14 to 29.

Govt working to push out support to firms as fast as it can: Lawrence Wong

A separate second cash payout, announced on July 23, will give another half a month's rent to eligible recipients, in view of the tightened safe management measures after returning to phase two (heightened alert) from July 22 to Aug 18. It will be disbursed in October.

The cash payout will not be disbursed automatically to tenants who rent only part of a property, or to licensees.

It will also not be automatically given to tenants who rent a mixed-use property, such as a shophouse used for both retail and residential purposes.

Such businesses should submit an application to Iras and provide supporting documents. Applications open on Aug 16 and end on Oct 15.

"Cash flow is like oxygen. It helps F&B SMEs survive in this uncertain time," he said, adding that the company's staff have remained employed while its customers continue to be served.

"Disbursing the payouts directly to the tenants this time round, rather than through the landlords, shows that Iras is constantly tweaking the implementation of these measures based on past lessons," he added.

"I am hopeful that, post-pandemic, the Government will continue to work closely in consultation with the business community to make the business conditions more favourable, so that companies like ours continue to thrive in Singapore in the long run."

More details on the scheme can be found at this website. 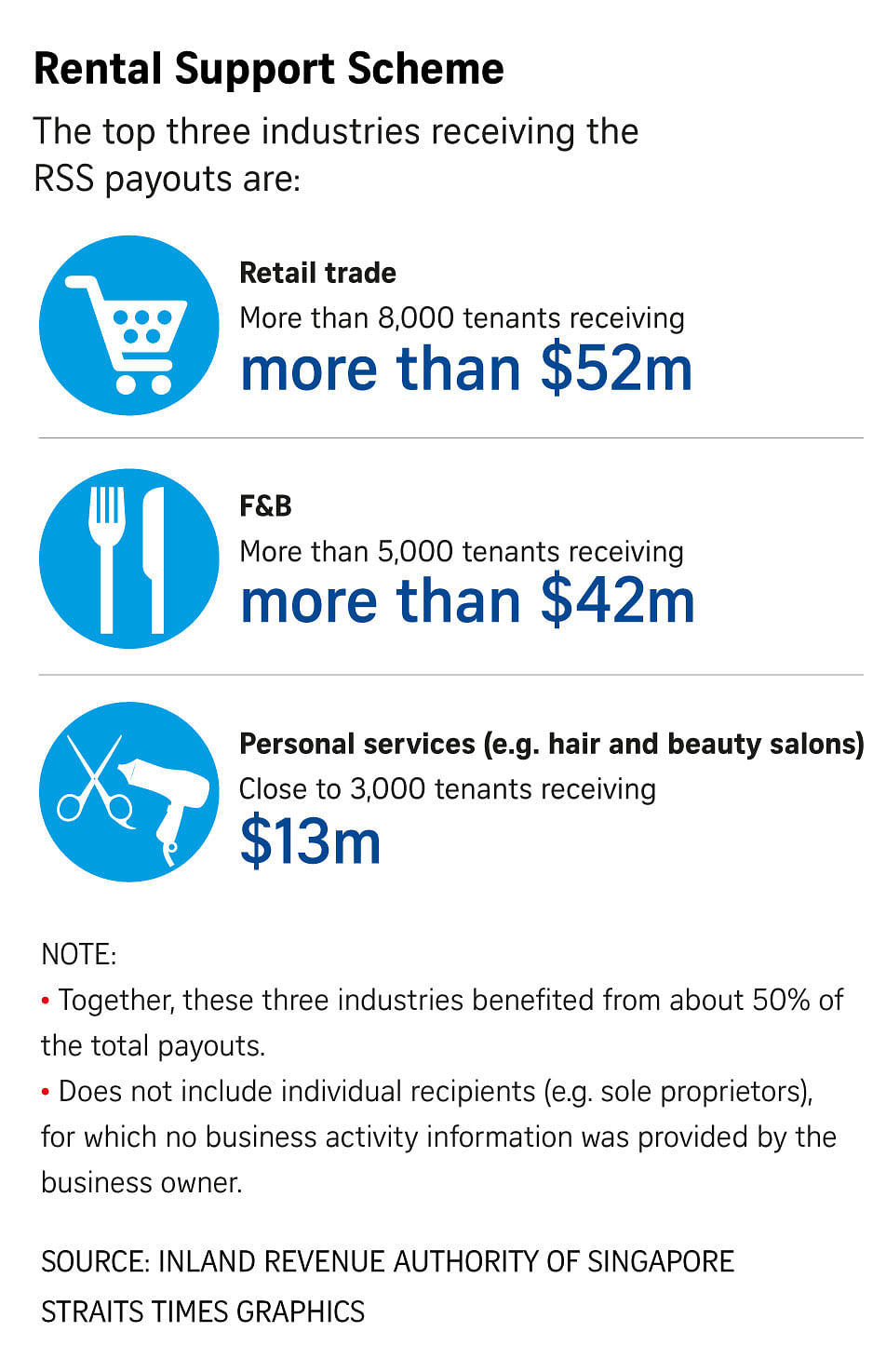