NEW YORK (NYTIMES) - Two nuclear-armed siblings with a long history of armed conflict. Two prime ministers facing public pressure for military action. And a snowy, mountainous region that both nations have coveted - and occupied with troops - for more than 70 years.

It was almost inevitable that fighting would break out again between India and Pakistan.

On Wednesday (Feb 27), Pakistani and Indian fighter jets engaged in a skirmish over Indian-controlled territory in the disputed border state of Jammu and Kashmir. At least one Indian jet was shot down, with Pakistan capturing its pilot.

The incursion came just one day after Indian aircraft flew into Pakistan and attacked near the town of Balakot. The Indian government claimed it was striking a training camp for Jaish-e-Muhammed, a terrorist group that was responsible for a Feb 14 suicide bombing in southern Kashmir that killed at least 40 paramilitary forces. Pakistan has insisted it had no involvement in the suicide attack.

Now there are fears that hostilities could escalate between the two countries, which were created by the bloody partition of British India more than 70 years ago and have coexisted uneasily ever since.

WHAT ARE THE ROOTS OF THE CONFLICT?

When the British finally gave up their colony of India in August 1947, they agreed to divide it into two countries: Pakistan, with a Muslim majority, and India, with a Hindu majority. (Bangladesh was initially part of Pakistan but gained its own independence in 1971 after a short war between India and Pakistan.) The sudden separation prompted millions of people to migrate between the two countries and led to religious violence that killed hundreds of thousands.

Left undecided was the status of Jammu and Kashmir, a Muslim-majority state in the Himalayas that had been ruled by a local prince. Fighting quickly broke out, and both countries eventually sent in troops, with Pakistan occupying one-third of the state and India two-thirds.

Although the prince signed an agreement for the territory to become part of India, the United Nations later recommended that an election be held to let the people decide. 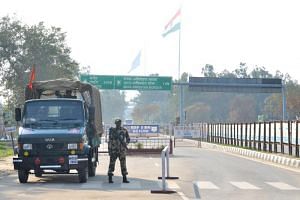 India and Pakistan headed to war? Analysts say the situation is fluid

That election never took place, and both countries continue to administer their portions of the former princely territory while hoping to get full control of it. Troops on both sides of the "line of control" regularly fire volleys at each other.

Muslim militants have frequently resorted to violence to expel the Indian troops from the territory. Pakistan has backed many of those militants, as well as terrorists who have struck deep inside India - most brutally in a four-day killing spree in Mumbai in 2008 that left more than 160 people dead.

WHY DID THE SITUATION ERUPT NOW?

The immediate cause was the Feb 14 suicide bombing by a young Islamic militant, who blew up a convoy of trucks carrying paramilitary forces in Pulwama in southern Kashmir. It was the deadliest attack in the region in 30 years.

But there are also broader political forces at work. India's prime minister, Narendra Modi, is up for re-election in May, and he is eager to avenge a bombing that has stirred outrage.

Pakistan, for its part, has a new prime minister, Imran Khan, who was elected last year with the backing of his country's powerful military. Khan wants to show that he can stand up to India, even as the country's economy is so weak that he is seeking bailouts from Saudi Arabia and China.

On Tuesday, US Secretary of State Mike Pompeo, called on leaders in both countries to avoid escalating the situation. He also said that Pakistan must take "meaningful action against terrorist groups operating on its soil". Under President Donald Trump, US foreign policy has shifted away from Pakistan, a long-time recipient of US aid, toward India, which the administration views as a bulwark against China's rising influence in Asia.

China, meanwhile, has become a close ally and financial patron of Pakistan. The Chinese urged both countries to exercise restraint after India's foray into Pakistani airspace.

Indo-Pakistan relations, however, have taken a back seat this week to another thorny foreign policy problem. Trump is meeting with North Korea's leader, Kim Jong Un, to discuss the possible dismantling of that country's nuclear program and how to achieve lasting peace on the Korean Peninsula.

WHAT IS LIKELY TO HAPPEN NEXT?

In a similar episode in 2016, after militants attacked an Indian army base in Uri, Kashmir, Indian forces crossed the line of control and carried out what the government called a "surgical strike" on terrorist camps there. (The Pakistani government has denied that the attacks occurred.)

"The strike after Uri made sense," said Myra MacDonald, a former journalist who has written two books on Indo-Pakistan relations. "The Indian government got sympathy from the Western world." But now, with India's plane shot down and pilot captured, the situation could escalate quickly. "It is impossible to get out of such a situation without a retaliatory spiral," she said.

Sreeram Chaulia, dean of the school of international affairs at O.P. Jindal Global University outside New Delhi, predicted that the military conflict would subside soon.

He worried instead that Pakistan-backed militants would carry out terrorist attacks in India. "The terrorist threat has not gone away," he said.

Khan, the Pakistani prime minister, urged India to settle matters through talks. "All big wars have been due to miscalculation," he said in a televised address. "My question to India is that given the weapons we have, can we afford miscalculation?"