NEW DELHI/BANGALORE - India is currently battling a devastating second Covid-19 wave. How fast is the spread of infection, and is the second wave affecting more younger people? Experts answer questions from The Straits Times.

How fast is the spread of infection in the second wave?

The second wave is spreading much faster than the first, a surge that has long overshot last year's peak and is still climbing. The increase has been driven by lax behaviour as well as the emergence of new strains like the British variant and Indian "double mutant" strain.

Dr Bhramar Mukherjee, the chair of biostatistics at the University of Michigan, has been tracking India's pandemic closely. She found that the highest 30-day relative increase in cases during the first wave (identified as the period between June 3 last year and Feb 14 this year in her analysis), was from 13,560 on June 22 to 45,601 on July 22, a jump of more than three times.

However, in this ongoing second wave since Feb 15, the highest 30-day relative increase was more than eightfold between March 8 (15,353) and April 7 (126,276). A tenfold increase in the number of deaths over a 30-day period was also recorded in the second wave compared with an increase of about three times in the first wave.

"The exponential rise has also been spectacular, with four or five states right now having an effective reproduction number larger than two," said Dr Mukherjee. The effective reproductive number (or R) is a way of rating a disease's ability to spread. A value of R above one means cases will continue to rise and a value more than two suggests an imminent exponential increase.

Are the symptoms different in the second wave?

Doctors say that all symptoms remain the same even for the three new variants of concern. Dr Satyanarayana Mysore, pulmonologist at Manipal Hospital in Bangalore, said claims of widespread ear pain and urinary tract infection as new symptoms were exaggerated.

Dr Balram Bharghava, head of the Indian Council of Medical Research, said more people were showing breathlessness in the first week of their first symptoms, unlike in the first wave, when patients felt wheezy in the second week.

Breathlessness is caused by cytokine storm, explained Dr Mysore. "This means too many inflammatory hormones are released by the immune system too quickly into the blood, impacting the body's ability to efficiently absorb oxygen."

It is one of the reasons for people developing low oxygen levels, Dr Mysore said. More people are needing oxygen in the second wave - 54.5 per cent, compared with 41.1 per cent in the first wave.

Are more younger people getting infected?

Many doctors have noticed an increase. Dr Digant Shastri, a paediatrician based in Surat in the western Indian state of Gujarat, said he has seen a high increase in infections among those aged between zero and 18. "If I was getting four cases a week earlier, now it is more than 50," he told The Straits Times.

The rise has been attributed to higher testing of children this year as test kits become more accessible and affordable. More children are also being tested because they have reported greater symptoms in the second wave. "The majority of cases last year were mildly symptomatic," said Dr Shastri.

Are RT-PCR tests failing to detect new strains of the virus?

RT-PCR (Reverse transcription-Polymerase chain reaction) tests are the most reliable way to detect coronavirus infections so far. However, there have been a growing number of reports in India suggesting these tests are turning out false negatives despite tested patients displaying strong Covid-19 symptoms. This poses a challenge as infected patients can go undetected and pass on the virus to others.

But the government has dismissed the speculation that the tests are failing to detect new strains, saying there is no known strain that can escape RT-PCR tests in India, which target two or more genes.

It is more likely that samples from Covid-19 patients are testing negative because of poor testing kits or other man-made errors such as improper collection of samples or their inappropriate handling. This is especially likely with labs understaffed as well as overworked against the overwhelming surge in cases.

Another reason for false negatives could be delayed testing, especially at a stage when the virus has progressed more deeply into the body and the viral load in a person's nose or throat has fallen below RT-PCR detection levels.

How bad can the pandemic get?

All models are projecting a peak for infections next month. The Institute for Health Metrics and Evaluation (IHME) model projects infections to peak in early-May, while Dr Mukherjee puts it in mid-May.

She projects reported cases at 800,000 to a million a day, with 4,500 deaths, while the IHME predicts about five million cases (reported and unreported) and 5,500 deaths at the peak of the pandemic. 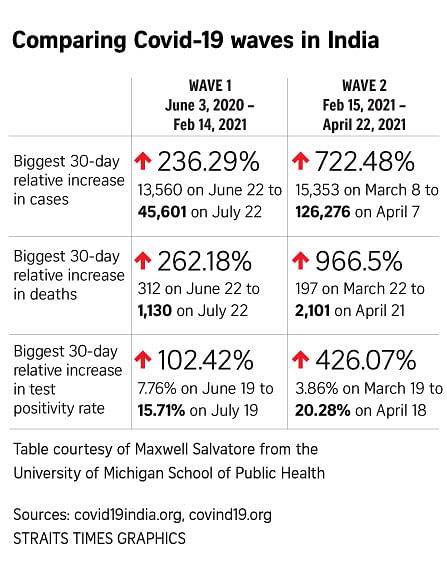