CHENNAI (REUTERS) - India set a new global record of the most number of Covid-19 infections in a day, as Prime Minister Narendra Modi on Sunday (April 25) urged all citizens to be vaccinated and exercise caution, saying the “storm” of infections had shaken the country.

The United States said it was deeply concerned by the massive surge in coronavirus cases in India and was racing to send aid to India.

India’s number of cases surged by 349,691 in the past 24 hours, the fourth straight day of record peaks, and hospitals in Delhi and across the country are turning away patients after running out of medical oxygen and beds.

“We were confident, our spirits were up after successfully tackling the first wave, but this storm has shaken the nation,” Mr Modi said in a radio address.

Mr Modi’s government has faced criticism that it let its guard down, allowed big religious and political gatherings to take place when India’s cases plummeted to below 10,000 a day and did not plan on building up the healthcare systems.

Hospitals and doctors have put out urgent notices that they were unable to cope with the rush of patients.

People were arranging stretchers and oxygen cylinders outside hospitals as they desperately pleaded for the authorities to take patients in, Reuters photographers said.

“Every day, it is the same situation, we are left with two hours of oxygen, we only get assurances from the authorities,” one doctor said on television.

Outside a Sikh temple in Ghaziabad city on the outskirts of Delhi, the street resembled an emergency ward of a hospital, but crammed with cars carrying Covid-19 patients gasping for breath as they were hooked up to handheld oxygen tanks.

Delhi’s Chief Minister Arvind Kejriwal extended a lockdown in the capital that was due to end on Monday for a week to try and stem the transmission of the virus which is killing one person every four minutes.

"We have decided to extend the lockdown by one week (until May 3)... The havoc of corona(virus) continues and there is no respite. Everyone is in favour of extending the lockdown," Mr Kejriwal said in a video statement.

“A lockdown was the last weapon we had to deal with the coronavirus but with cases rising so quickly, we had to use this weapon,” he said.

India’s total tally of infections stands at 16.96 million and deaths at 192,311 after 2,767 more died overnight, Health Ministry data showed. In the last month alone, daily cases have gone up eight times and deaths by 10 times.

The country of 1.3 billion people is on the brink of a humanitarian catastrophe, Dr Ashish Jha, dean of the Brown University School of Public Health, warned in an op-ed published Saturday in The Washington Post.

“Our hearts go out to the Indian people in the midst of the horrific Covid-19 outbreak,” US Secretary of State Anthony Blinken said on twitter.

“We are working closely with our partners in the Indian government, and we will rapidly deploy additional support to the people of India and India’s healthcare heroes.”

The United States has faced criticism in India for its export controls on raw materials for vaccines put in place via the Defense Production Act and an associated export embargo in February.

The Serum Institute of India (SII), the world’s biggest vaccine maker, this month urged US President Joe Biden to lift the embargo on US exports of raw materials that is hurting its production of AstraZeneca shots.

Others such as US Congressman Raja Krishnamoorthi urged the Biden administration to release unused vaccines to India.

“When people in India and elsewhere desperately need help, we can’t let vaccines sit in a warehouse, we need to get them where they’ll save lives,” he said.

The European Commission said it has activated its EU Civil Protection Mechanism and is seeking to send oxygen and medicine to virus-hit India after receiving a request from Delhi.

“Alarmed by the epidemiological situation in India. We are ready to support,” Commission President Ursula von der Leyen wrote on Twitter on Sunday.

Britain said it was sending more than 600 medical devices including oxygen concentrators and ventilators to India.

The equipment comes from Britain’s surplus stock and the first shipment was due to arrive in New Delhi early on Tuesday, the British foreign ministry said.

“We stand side by side with India as a friend and partner during what is a deeply concerning time in the fight against Covid-19,” British Prime Minister Boris Johnson said.

“We will continue to work closely with the Indian government during this difficult time and I’m determined to make sure that the UK does everything it can to support the international community in the global fight against pandemic.”

India's surge is expected to peak in mid-May with the daily count of infections reaching half a million, the Indian Express said, citing an internal government assessment.

Mr VK Paul, a Covid-task force leader, made the presentation during a meeting with Mr Modi and state chief ministers and said that the health infrastructure in heavily populated states is not adequate enough to cope, according to the newspaper.

Mr Paul did not respond to a Reuters request for comment. 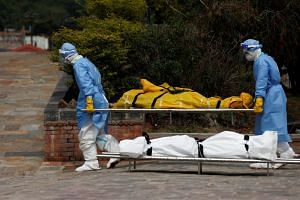