NEW DELHI – Pakistan has suspended bilateral trade with India and will downgrade diplomatic ties to build pressure against its neighbour for changing the status of Kashmir.

The latest diplomatic row over Kashmir started after the government on Monday (Aug 5) withdrew Kashmir’s special status, which had guaranteed a high degree of autonomy for the region, including a separate flag and protection of property from non-residents.

The government bifurcated and converted the state of Jammu and Kashmir into a union territory, which increases federal hold.

Pakistan’s National Security Committee (NSC) decided to review bilateral arrangements with India and take the Jammu and Kashmir issue to the United Nations.

Pakistan will also observe Aug 15, India’s Independence Day from the British, as a “black day”.

Kashmir is at the heart of the conflict between the rivals and neighbours, which have fought three wars and regularly exchange fire across the de facto border.

Ties touched a new low after 40 Indian soldiers were killed in an attack involving the Pakistan terror group Jaish e Mohammed in Pulwama in Kashmir in March.

But analysts said Pakistan’s move would have little impact on India. 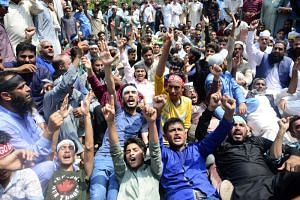 "These are largely symbolic measures except for the trade ban, which will hurt both countries. There has been a lot of public pressure on the government (in Pakistan) to come up with an answer,’’ said Mr Sharat Sabharwal, India’s former high commissioner to Pakistan. “Pakistan has tried to internationalise Kashmir but they have not been sucessful.’’

The trade ban would hurt Pakistan more than India, said an exporters' organisation.

The president of the Federation of Indian Export Organisations, Mr Sharad Kumar Saraf, noted that India’s exports to Pakistan have a limited profile, as Pakistan has never extended most-favoured-nation status to India, and those goods would have ready markets in South Asia and the Middle East.

Ladakh has been carved out from the rest of Jammu and Kashmir into a Union Territory under the new changes.

Former Indian foreign secretary Lalit Mansingh said: “It looks like Pakistan will spearhead the diplomatic offensive against India. “We can now expect China to give Pakistan support.

“They (the Indian government) have got the mandate to do it. What adds credibility is that most of the parties have supported the government, even those opposed to the Bharatiya Janata Party (BJP).”

In other reactions, the United States called for “peace and stability” along the de facto border between India and Pakistan and questioned the detention of state leaders by India, though it stopped short of censure.

“We are concerned about reports of detentions and urge respect for individual rights and discussion with those in affected communities,” said US State Department spokesman Morgan Ortagus.

The United Arab Emirates, an important voice in the Arab world, has come out in support of India’s changes, saying it is an “internal matter of India”, as did neighbouring Sri Lanka.

Many have noted the timing of the move, coming after US President Donald Trump had said, during Pakistan Prime Minister Imran Khan’s visit to Washington last month, that Indian Prime Minister Narendra Modi had asked him for mediation on Kashmir.

Pandemonium in legislature a sign of what's to come in Kashmir

India later denied it had asked for mediation and the State Department also backtracked, saying the US is there to help if both sides want it.

Pakistan has long sought a third party to mediate on Kashmir, but India has maintained it remains a bilateral issue.

Some also anticipated increased tensions along the Line of Control, the de facto border.

Mr Sameer Patil, a fellow in the International Security Studies Programme at Gateway House, said: “India can expect heightened action on the Line of Control, exceeding the scale of exchange of artillery fire and infiltration activities seen in recent days.”