Pakistani ministers and advisers told the London-based newspaper that the country's new government will review BRI investments and renegotiate a trade agreement signed more than a decade ago that it says unfairly benefits Chinese companies.

The projects concerned are part of the US$62 billion (S$85 billion) China-Pakistan Economic Corridor (CPEC) plan - by far the largest and most ambitious part of the BRI, which seeks to connect Asia and Europe along the ancient Silk Road.

They include a huge expansion of the Gwadar port on Pakistan's south coast, as well as road and rail links and US$30 billion worth of power plants.

"The previous government did a bad job negotiating with China on CPEC - they didn't do their homework correctly and didn't negotiate correctly so they gave away a lot," Mr Abdul Razak Dawood, the Pakistani member of Cabinet responsible for commerce, textiles, industry and investment, told FT.

"Chinese companies received tax breaks, many breaks and have an undue advantage in Pakistan; this is one of the things we're looking at because it's not fair that Pakistan companies should be disadvantaged," he said.

Pakistan's new Prime Minister Imran Khan has established a nine-member committee to evaluate CPEC projects, FT said. It is scheduled to meet for the first time this week and will "think through CPEC - all of the benefits and the liabilities", said Mr Dawood, who sits on the new committee. 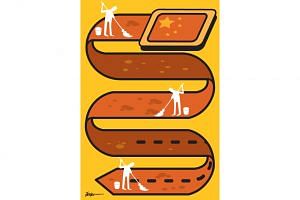 Towards a Belt and Road Initiative paved with empathy

"I think we should put everything on hold for a year so we can get our act together," he added. "Perhaps we can stretch CPEC out over another five years or so."

Several other officials and advisers to the Khan government concurred that extending the terms of CPEC loans and spreading projects out over a longer timeframe was the preferred option, rather than outright cancellation, FT reported.

China's foreign minister Wang Yi indicated during a visit to Islamabad last weekend that Beijing could be open to renegotiating its 2006 trade deal with Pakistan.

"CPEC has not inflicted a debt burden on Pakistan," he told reporters. "When these projects get completed and enter into operation, they will unleash huge economic benefits."

Islamabad's second thoughts follow other recent setbacks for BRI, which is seen by many as a bid by China's President Xi Jinping to extend Beijing's influence throughout the world.

Governments in Malaysia, Sri Lanka, Myanmar and elsewhere have already expressed reservations over the onerous terms of Chinese BRI lending and investment.

Pakistan is in the middle of a financial crisis and must decide in the coming weeks whether to turn to the International Monetary Fund (IMF) for its 13th bailout in three decades.

Mr Asad Umar, Pakistan's new finance minister, told FT he was evaluating a plan that would allow Islamabad to avoid an IMF programme, which several people close to the government say would involve new loans from China and perhaps also from Saudi Arabia.

Mr Umar and Mr Dawood both said Pakistan would be careful not to offend Beijing even as it takes a closer look at CPEC agreements signed over the past five years. Mr Khan was elected on a platform of anti-corruption and transparency and has pledged to publish details of existing CPEC contracts.

"We don't intend to handle this process like Mahathir," Mr Umar said, referring to the nonagenarian Malaysian Prime Minister Mahathir Mohamad who has warned about the risk of Chinese "neo-colonialism". Malaysia has cancelled three China-backed pipeline projects and put a showpiece BRI project in Malaysia, the East Coast Rail Link, under review.