NEW DELHI (BLOOMBERG) - Asia's richest man Mukesh Ambani has helped his younger brother avert a stint in jail, stepping in to make an US$80 million (S$108 million) payment for his sibling Anil whose telecom-to-infrastructure empire is struggling under the weight of debt.

The embattled former billionaire, Anil Ambani, thanked his brother Mukesh, and his sister-in-law, after Reliance Communications Ltd completed the required 5.5 billion rupee (S$108 million) payment to the local unit of Ericsson AB for past maintenance services.

Repeated failures to pay and Anil Ambani's personal guarantee landed him in trouble in February, with the top court giving him a month's notice to comply or spend time in prison.

"My sincere and heartfelt thanks to my respected elder brother, Mukesh, and Nita, for standing by me during these trying times, and demonstrating the importance of staying true to our strong family values by extending this timely support," he said in a statement from Reliance Communications.

"I and my family are grateful we have moved beyond the past, and are deeply grateful and touched with this gesture."

The last-minute twist underscored family ties despite their turbulent relationship more than a decade after the scions of one of India's richest families feuded over control of an empire left behind by their father.

After they carved up the conglomerate, the older brother's oil and petrochemicals business flourished, while Anil Ambani's businesses ranging from telecom to power and infrastructure strained under massive debt, with the tycoon fending off creditors in multiple court cases.

As a result, the younger sibling's net worth has shrunk to about US$300 million, from at least US$31 billion in 2008 based on the current foreign-exchange rate, according to data compiled by Bloomberg, marking his stunning fall.

That is in stark contrast to the success of Mukesh, whose net worth now is US$54.3 billion and added US$10 billion this year alone, according to the Bloomberg Billionaires Index.

The decline in Anil's wealth ranks among the largest and fastest implosions in modern history ranking alongside the reported US$70 billion loss Japan's Masayoshi Son suffered during the dot-com crash after SoftBank Group Corp.'s stock tumbled.

Brazil's Eike Batista was worth more than US$30 billion at the start of the decade, according to the index. But his commodities and logistics empire evaporated under a mountain of debt and insider trading investigations. He gained the rare distinction of "negative billionaire" in 2015 when his net worth sank to more than US$1 billion in debt. 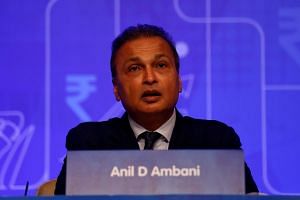 Lenders dump Anil Ambani group shares after $2.4b of value is wiped out

The Times of India, citing a person working for the Anil Ambani group, reported that the bailout money was an outright grant from his elder brother.

Shares of RCom, as the telecom carrier is called, had slipped 9.1 per cent on Monday (March 18) in Mumbai before the announcement.

The stock plummeted 60 per cent in 2018 as Anil Ambani struggled to close a 2017 deal to sell spectrum, signal towers and fibre to Reliance Jio Infocomm Ltd, a new service provider controlled by his elder brother, for 173 billion rupees.

RCom said Monday that the two companies have mutually agreed to terminate the pact, adding RCom is committed to "a comprehensive resolution" of overall debt through the National Company Law Tribunal.

As regulations delayed the completion of his biggest deal, creditors such as Ericsson began demanding past dues. The Swedish equipment maker's relentless legal pursuit led to a settlement under which RCom was to pay half of the past claims, or 5.5 billion rupees - an offer backed by a personal guarantee from Anil Ambani.

Failure to keep this promise after the personal guarantee escalated into a contempt case, with the court eventually setting the deadline.

The threat of a prison term to Anil Ambani also came as a rare warning to some of India's richest borrowers whose firms have turned defaulters. The nation's policy makers and courts have been cracking down hard on delinquency to help banks saddled with the world's worst bad-loan ratio.

The Ambani brothers used to serve as executives at their father's company. In 2005, three years after their father's death, the two settled to split the empire into two. Anil Ambani got newer businesses such as telecom, power generation and financial services.

Mukesh Ambani also re-entered telecom with the creation of Reliance Jio Infocomm. The nationwide 4G network, which debuted with free services in 2016, disrupted the industry, forcing rivals including RCom to bleed, merge or exit.