NEW DELHI (BLOOMBERG) - In a remarkable warning to India's elite, the nation's top court said it will put one of the country's most prominent business tycoons behind bars unless his group pays its dues.

It's the latest twist in a dispute that helped push billionaire Anil Ambani's mobile-phone carrier into bankruptcy proceedings and cast an unflattering light on the Indian mogul, who is the younger brother of Asia's richest man.

If payments aren't made within four weeks, the 59-year-old businessman will be jailed for three months, the court said. Mr Ambani's group said it will comply.

The threat shows India is upping the ante when it comes to tackling a mountain of bad debt that's among the worst in the world. A US$190 billion (S$257 billion) pile of soured and stressed debt has put the future of some Indian lenders in doubt and curbed investment,  just as the country is preparing for general elections.

"This will certainly give more confidence to foreign investors regarding enforcement of contracts in India." 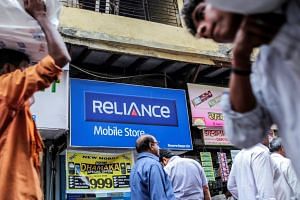 Lenders dump Anil Ambani group shares after $2.4b of value is wiped out

Noting that the Ambani group had "willfully not paid" the money owed to Ericsson, the court said it "clearly demonstrates cavalier attitude" towards the "highest court of the land."

India's banking regulator, lawmakers and courts have been cracking down on delinquent borrowers armed with a two-year-old bankruptcy law to tackle the overhang of bad debt. India has surpassed Italy in having the worst non-performing loan ratio among the world's major economies.

The concerted crackdown on defaulters has given banks more bargaining power as founders and controlling shareholders can no longer hope to walk away from their dues without major consequences, irrespective of how storied their business families might be.

It's rare for billionaires to go to prison in India. Subrato Roy - founder of the Sahara Group who was sent into custody in 2014 for his group's failure to comply with regulator's order for a US$3.9 billion refund to depositors - was an exception.

Most others, including Vijay Mallya, founder of defunct Kingfisher Airlines, have managed to dodge arrest.

The dispute with Ericsson began when the Swedish telecommunications equipment maker sought to collect 16 billion rupees in dues from Reliance Communications, or RCom.

The Indian company settled the dispute with Ericsson in May last year, but failed to meet the payment deadlines, prolonging the row.

RCom decided to enter bankruptcy proceedings earlier this year after struggling to repay about US$6.3 billion in debt.

Ironically for Mr Ambani, his extraordinary reversal of fortune in the telecommunications industry came after his older brother stormed into the market with a new outfit called Reliance Jio Infocomm, igniting a price war by offering free calls.

RCom had agreed to sell its airwaves, towers, fibre and other telecom assets to Reliance Jio in December 2017 for 173 billion rupees to fend off creditors. But regulatory and legal hurdles stalled the closing of the deal, frustrating RCom's attempts to repay lenders.

The telecom operator, which had US$113.6 million in cash and equivalents as of Sept 30, may have to rely on the group for paying these dues.

"It'll be very difficult for RCom to meet the ordered payment and the group companies might be utilised to pay the dues through inter-corporate loans," said Mr Sameer Kalra, president at Mumbai-based advisory Target Investing. "This risks group companies as well."