INDIA - Prime Minister Narendra Modi on on Thursday (Aug 8) called the change in the status of Kashmir a "historic decision" that would secure the future of its people.

In a television address to the nation to explain the withdrawal of Jammu and Kashmir’s special status – which had guaranteed a high degree of autonomy for the region – and the bifurcation of the state into the Union Territory of Ladakh and the Union Territory of Jammu and Kashmir, he said: "Some people support the idea and other people don't agree. Opinion on our decision is divided. There is a discussion on this and the federal government is giving its response. But I urge all these people who disagree to join the process of development and the (federal) government in giving Jammu and Kashmir and Ladakh a new direction."

Assuring residents of Kashmir, who have deplored the government's decision, Mr Modi promised development, connectivity and upgrades in infrastructure from roads to the airport, as well as to stamp out terrorism.

He even expressed hope that Bollywood and the Tamil film industries, among others, would shoot films in Kashmir.

"Jammu and Kashmir and Ladakh were deprived of the benefit to the rest of India. It's a new beginning," he said, noting that 42,000 people had lost their lives in the past three decades because of the violence.

"We took a historic decision as one country."

Still, Mr Modi's Kashmir move has had both domestic and international fallout. India warned Pakistan against trying to ramp up tensions over Kashmir even as Islamabad continued to downgrade ties, banning Indian films from being shown in cinemas and stopping a train service to India. 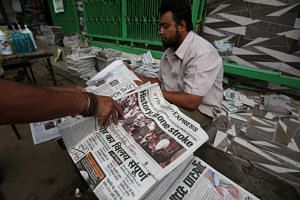 "We are looking at political, diplomatic and legal options. As far as military response is concerned, we are not looking at that," Pakistan Foreign Minister Shah Mehmood Qureshi said on Thursday.

In response, India warned its neighbour on Thursday against trying to ramp up tensions.

"The government of India regrets the steps announced by Pakistan yesterday and would urge that country to review them so that normal channels for diplomatic communications are preserved," said India's Ministry of External Affairs.

"The intention behind these measures is obviously to present an alarming picture to the world of our bilateral ties. The reasons cited by Pakistan are not supported by facts on the ground."

Kashmir is at the heart of a conflict between rivals and neighbours India and Pakistan, which have fought three wars and regularly exchange fire across their de facto border.

India has for years sought action from Pakistan on terrorism even as Pakistan has maintained that Kashmir is the core issue. Tensions reached a new high after 40 soldiers were killed in February in a suicide attack claimed by Pakistan-based terror group Jaish-e-Mohammed in Kashmir.

The Indian government's move has had domestic ramifications - it was welcomed in Jammu and most parts of Ladakh but not in Kashmir.

It has also faced flak for a communication blackout to prevent any outbreak of violence in Kashmir, where there was opposition to the removal of its special status and the bifurcation. It has also faced criticism over the arrest of Kashmir's top political leaders, including former chief ministers Omar Abdullah and Mehbooba Mufti.

At least 300 politicians and separatists have reportedly been detained to prevent protests, according to the police, the media and local leaders.

Opposition parties, including Congress, have been divided in opinion over the decisions.

Senior Congress leader Karan Singh, whose father Maharaja Hari Singh was the last ruler of Jammu and Kashmir and had signed the Instrument of Accession in 1947, said he did not agree with a "blanket condemnation" of the government's decision. His comment ran contrary to criticism from Congress over the government's lifting of the special status and the communication lockdown.

"Ladakh's emergence as a union territory is to be welcomed," said Dr Singh, 88. He noted that many would be mortified at the development but political dialogue needed to continue and pressed for the release of the jailed leaders of the Kashmir parties.