NEW DELHI (AP) - India's government has introduced a resolution revoking the special constitutional status of its portion of Kashmir, amid a heavy security crackdown in the disputed Himalayan region.

The constitutional provision forbids Indians from outside the region from buying land or permanently settling in the Muslim-majority territory.

Here are five questions and answers on the issue:

The Hindu nationalist-led government of Indian Prime Minister Narendra Modi on Monday (Aug 5) proposed revoking Article 370 of India's Constitution, which confers special rights to permanent residents of the state of Jammu and Kashmir.

Mr Modi's home minister, Mr Amit Shah, says the longstanding rights that preceded India's independence from British rule in 1947 were "temporary" and that the government would abolish them.

Critics of such a measure say that in doing away with Article 370, the government hopes to change Indian-controlled Kashmir's Muslim-majority demographics by allowing in a flood of new Hindu residents.

To tackle any law and order situation, the region has been put under a heavy security cover, with prohibitory orders in place against public assembly. Top pro-independence leaders have been put under house arrest and Internet and phone services have been cut.

Mr Shah proposed revoking Article 370 amid an uproar in India's upper house of Parliament, and was expected to address the lower house on the issue later on Monday.

Kashmir is divided between arch rivals India and Pakistan but claimed by both in its entirety.

2 WHAT IS KASHMIR'S SPECIAL STATUS?

Article 35A of India's Constitution permits the local legislature in Indian-controlled Kashmir to define permanent residents of the region. The article came into being in 1954 by a presidential order under the Constitution's Article 370, which grants special autonomous status to Jammu and Kashmir state.

Article 35A forbids Indians from outside the state from permanently settling, buying land, holding local government jobs or winning education scholarships in the region.

The article, referred to as the Permanent Residents Law, also bars female residents of Jammu and Kashmir from property rights in the event that they marry a person from outside the state. The provision also extends to such women's children.

While Article 35A has remained unchanged, some aspects of Article 370 have been diluted over the decades.

Critics of Article 35A say the provision did not have parliamentary sanction, and that it discriminates against women.

A 1927 order by the administration of the state of Jammu and Kashmir gave the state's subjects exclusive hereditary rights. Two months after India won independence from British rule in August 1947, Maharaja Hari Singh, the then-ruler of Jammu and Kashmir, signed a Treaty of Accession for the state to join the rest of the union, formalised in Article 370 of the Indian Constitution.

Further discussions culminated in the 1952 Delhi Agreement, a presidential order that extended Indian citizenship to the residents of the state but left the maharaja's privileges for residents intact. 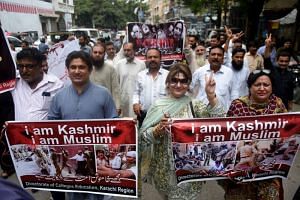 4 HOW CAN IT BE REPEALED?

Article 370(3) of the Indian Constitution permits revocation of the law by presidential order. However, such an order must be introduced before the state's Constituent Assembly. Since that body was dissolved in 1957, experts have different views on the abrogation of the law, with some believing it needs approval by state lawmakers and others seeing a presidential order as sufficient.

The validity of Article 35A has been brought before India's Supreme Court. Bharatiya Janata Party (BJP) members have said that if the court upholds the provision, the Modi-led government will revoke it by presidential order.

5 WHAT COULD HAPPEN IF IT'S SCRAPPED?

If Kashmir's special status is repealed, people from the rest of India would have the right to acquire property in Jammu and Kashmir and settle there permanently.

Kashmiris fear this would lead to a demographic transformation of region from majority Muslim to majority Hindu.