NEW DELHI (REUTERS, AFP) - Indian shares surged on Monday (May 20), a day after exit polls showed Prime Minister Narendra Modi would retain power with a bigger majority in the parliament, with financials leading the charge.

Despite facing criticism for weak job growth and farm prices, Modi turned the campaign into a fight for national security after tensions with Pakistan escalated earlier this year.

"I expect another 2-3 per cent rally in the market in the next 3-4 days based on the cue," said Samrat Dasgupta, a fund manager at Esquire Capital Investment Advisors.

"But once the results are out on Thursday, even if it is as expected, I don't see much upside to the market."

"The economy is passing through a rough patch because a lot of data indicators are showing a slowdown, so people will wait for announcements from the new govt/cabinet to see what policies will be made," Dasgupta said.

Modi's party said on Monday that the exit polls showed an "overwhelming" vote in favour of a second term for the Hindu nationalist leader.

About 65 per cent of India's 900 million-strong electorate turned out over the six weeks of voting, the election commission said. 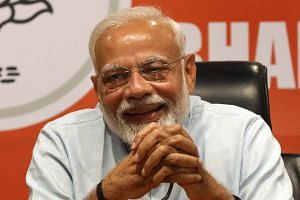 Modi tipped to return to power as India elections end

Modi, who fought an acrimonious campaign framed around his tough stance on national security, and other top BJP leaders made no immediate claim of victory.

As the vote drew to a close, the nationalist leader spent the weekend at a retreat in the Himalayas. He posted a Twitter picture of himself in a Hindu saffron robe looking out over the mountains.

Party spokesman G.V.L. Narasimha Rao said the polls "clearly show a huge positive vote for the leadership of Narendra Modi who has served the country with unmatched dedication.

"That people reward good performance has once again been proved by the overwhelming public mandate. This is a slap for the abusive opposition that made baseless charges and spoke lies," he added.

India's NSE stock futures listed on the Singapore exchange , an indicator for the broader NSE index, was up 2.02 per cent as of 0348 GMT, after rising as much as 2.76 per cent.

Financial stocks led gains, boosted by Yes Bank Ltd , which was up 6.2 per cent, and State Bank of India Ltd , which surged 5.4 per cent.

The Nifty IT index was down 1 per cent, dragged by Infosys Ltd's 1.3% fall, as the rupee rallied.