Indian Prime Minister Narendra Modi will return to power with a clear majority for his alliance, exit polls predicted, as curtains came down on the largest democratic exercise in the world.

Voters in 59 constituencies voted yesterday, ending the seven-phase elections in which 900 million people were eligible to vote.

At least five exit polls showed between 286 and 340 seats for the alliance led by the ruling Bharatiya Janata Party (BJP).

They predicted a range of 70 to 132 seats for the alliance headlined by the opposition Congress party.

Elections were held for 542 seats in the Lower House of Parliament, with 272 seats needed to secure a majority. Election to one seat in Vellore, Tamil Nadu, was called off. The official results will be announced on Thursday. Two polls predicted the BJP would fall short of a majority. The ABP Nielsen predicted 267 for the BJP-led alliance while a Neta-Newsx poll showed 242.

Today's Chanakya, a leading opinion poll firm, predicted a landslide win for the BJP with 291 seats - and 340 for the alliance it leads - with 70 seats going to the Congress-led alliance. The Times Now-VMR poll predicted the BJP-led alliance would win 306 seats.

In the 2014 General Election, the BJP won 282 seats, becoming the first party in 30 years to win a majority. Congress was reduced to 44 seats, its worst showing in decades.

Exit polls, however, have been proved wrong in some past elections, like in 2004.

In the politically important state of Uttar Pradesh, some exit polls suggested that the alliance between the Samajwadi Party and the Bahujan Samaj Party, which was expected to blunt the BJP charge, had failed to make much impact. The BJP won 72 out of 80 seats in Uttar Pradesh in 2014.

The BJP reacted to the exit polls by tweeting a cartoon of Mr Modi mowing down the opposition. 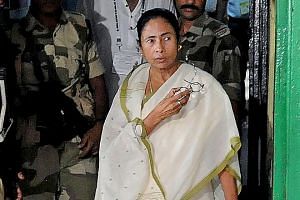 In contrast, Mr Omar Abdullah, an opposition leader, said: "Every single exit poll can't be wrong! Time to switch off the TV, log out of social media and wait to see if the world is still spinning on its axis on the 23rd (when the official results will be announced)."

Mr Modi came to power on a landslide victory five years ago, riding a popularity wave in a country upset over corruption scandals during the Congress rule. He remains the most popular leader despite growing unemployment and a farm debt crisis. The BJP pinned its campaign on the issue of national security following a face-off with Pakistan over the killing of more than 40 Indian soldiers in Kashmir last month.

The Congress party, which had a minor resurgence following victories in state elections in December, was unable to rally the splintered opposition and tie up alliances in states like Uttar Pradesh and Delhi.

The campaigning often descended into name calling and personal attacks. Congress president Rahul Gandhi accused Mr Modi of being a "chor" or a thief, alleging impropriety in a defence deal. Mr Modi called Mr Gandhi's father Rajiv, a former prime minister who was assassinated on the campaign trail in 1991, India's most corrupt man, accusing him of using a warship for a family holiday.

Analysts said that this was the most negative campaign in recent years. "We have moved away from issues to individuals. We also moved away from focusing on what is important for people to highlighting the negatives of others," said Dr Sandeep Shastri, pro-vice-chancellor of Jain University.

"This was the most disturbing part of the campaign largely because, be it the BJP or opposition parties, they are not able to focus positively on what they have to offer the people."

A version of this article appeared in the print edition of The Straits Times on May 20, 2019, with the headline 'Modi tipped to return to power as India elections end'. Subscribe
Topics:
More
Whatsapp Linkedin FB Messenger Telegram Reddit WeChat Pinterest Print Purchase Article Copy permalink