Iran's Islamic Revolutionary Guard Corps seized the Stena Impero on Friday, surrounding it with attack boats before troops rappelled onto its deck from a helicopter.

The oil tanker and its 23 crew have since been impounded at the southern port of Bandar Abbas for allegedly breaking "international maritime rules".

Apart from the 18 Indians, there are three Russians, a Latvian and a Filipino on the ship.

The seizure has been seen as a tit-for-tat move after British authorities detained an Iranian tanker off Gibraltar this month on suspicion it was shipping oil to Syria in breach of EU sanctions.

The foreign ministry said it had sought consular access to the Indian crew.

"We have requested for early release and repatriation of 18 Indians who are detained off the Iranian coast," foreign ministry spokesman Raveesh Kumar said at a media briefing.

"We have sought access and we do hope access will be granted very soon. We continue to impress upon Iranian authorities to release them so that we can begin the process of repatriation."

Images from inside the ship released by Iranian authorities on Monday showed some Indian crew members sat around a table, chatting and smiling. Two members could be seen cooking in the ship's kitchen.

The tanker's seizure has deepened a crisis between Iran and the Western countries that was triggered in April when the US said it would sanction countries buying oil from Iran. 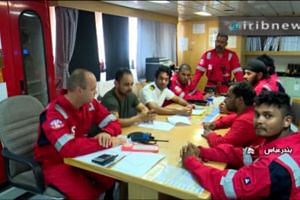 Stena Bulk says it spoke to crew of tanker seized by Iran, all safe and well

Mr Kumar said India was also hopeful the 24 Indians who are part of the crew on board Iranian tanker Grace 1, which was seized by Gibraltar authorities on July 4, would be safely returned.

"We had sought consular access and it was granted yesterday (Wednesday). A three-member team visited and met all the crew members," he added.

"What we saw was all the crew members were very calm and composed, there was no sense of panic... we assured them that the government was taking all necessary steps for their early release."

Iran has hinted it is open to a tanker swap - releasing the Stena Impero in exchange for its tanker Grace 1 being allowed on its way.