The government says it suspended communications across the Kashmir Valley, including the main city of Srinagar, to prevent rumours from spreading after the state was downgraded to two federal districts.

The suspension by the government of Prime Minister Narendra Modi has almost completely isolated people in Indian-ruled Kashmir.

Mr Firdous Ahmad, a Srinagar resident, said the restoration of landline service "definitely brings a sigh of relief" from Kashmiris living under the lockdown.

He said he hoped cellphone and Internet data services, which are more widely used, would also be restored soon.

People lined up at offices or homes that have landline telephones to try to contact family and friends after being unable to do so for a month.

But many were unable to get through after repeated attempts.

"Our landlines have been restored, but we are still unable to talk to people. It is frustrating. I have been trying to call people since morning but I am not getting through," said Mr Syed Musahid, a Srinagar resident. 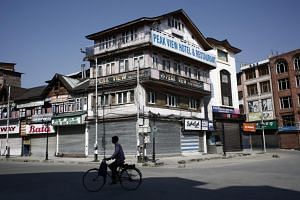 Many Kashmiris living outside the valley also said they were having trouble getting in touch with their families back in Kashmir.

"I kept trying a hundred times to reach my family in Kashmir, and only then did my call go through," said Ms Bint-e-Ali, a Kashmiri in the Indian city of Bengaluru.

She said she still hasn't been able to talk to her ailing grandmother in Srinagar.

"I hope I live to tell this horrendous tale to our next generation about how India didn't even let us talk to our family and friends," she said.

The Press Trust of India news agency reported there are no longer any restrictions on daytime movements in the Kashmir Valley. However, checkpoints remain in place.

There have been sporadic protests against India's downgrading of the region's autonomy that were quelled by security forces who fired pellets and tear gas.

Kashmir has been divided between India and Pakistan since they won independence from British colonialists in 1947. They have fought two wars over its control.

India has tried to suppress frequent uprisings against its rule, including an armed rebellion that started in 1989.

About 70,000 people have been killed since that uprising and in the subsequent Indian military crackdown.