SRINAGAR, INDIA (WASHINGTON POST) - He was the kind of professor students adored, always ready to help with books, advice or small loans.

His colleagues in the sociology department found him reliable and ambitious, a scholar whose research on consumerism might propel him to a post elsewhere in India.

So it was out of character when Mohammad Rafi Bhat failed to attend a faculty meeting at the University of Kashmir one Friday afternoon last year.

His family, too, had no idea where he was. Two days later, when his colleagues turned on their televisions, their concern turned to shock: Bhat was dead, having joined a group of anti-India militants who were killed in a confrontation with security personnel.

Bhat's brief transition from academia to insurgency was part of a troubling trend. Growing numbers of young Kashmiris turned to militancy in 2018, according to official figures, giving new energy to an armed struggle that as recently as a few years ago appeared to be diminishing.

Some of the recruits, like Bhat, are highly educated and have promising careers ahead of them; others are high school dropouts from rural villages.

But each one embraced violence, drawn to a three-decade insurgency against Indian rule in its portion of Kashmir, the Himalayan region claimed by India and Pakistan.

One of the recent recruits was Adil Ahmed Dar, a 19-year-old suicide bomber who nearly sparked a war between the two nuclear-armed neighbours. Dar drove an explosives-laden vehicle into a security convoy on Feb 14, killing 40 paramilitary personnel.

It was the worst such attack in the history of the insurgency, and Jaish-e-Muhammad, a Pakistan-based terrorist group, claimed responsibility for the bombing.

Indian security officials accuse Pakistani authorities of sheltering the leadership of militant groups fighting in Kashmir, as well as providing them with guidance, training and material support. Pakistan denies the accusations, but recently launched a crackdown on militant groups inside its borders.

While India has repeatedly denounced Pakistan, it has remained nearly silent on the increase in local participation in the insurgency. Last year, 191 Kashmiris joined militant groups, according to an Indian Army official who spoke on condition of anonymity, up 50 per cent from 2017, when the same figure was 126.

Bhat, 31, received his doctorate from the University of Kashmir and began teaching there. His students said they were crushed to learn of his death but described it as a form of martyrdom.

"It is a personal choice," said Mr Mohammad Rayees Rafeeqi, 24. "You cannot stop anyone."

Kashmir could be "hurtling towards a heightened phase of terrorism", according to an assessment recently published by the South Asia Terrorism Portal, a Delhi-based website that tracks militant groups in the region.

Even as the Indian government has clamoured for action against Pakistan, "what is being completely overlooked are strategies to restore internal stability and sober governance" to Jammu and Kashmir, India's only Muslim-majority state.

Critics say heavy-handed tactics by India have bred anger and despair. Kashmiris describe a sense of daily humiliation, sometimes petty and sometimes grave, together with a feeling of suffocation by a conflict that shows no hope of immediate improvement.

"We can say that Pakistan is fishing in troubled waters," Ms Mehbooba Mufti, who served as chief minister of Jammu and Kashmir until last year, said in an interview.

Last month, "a Kashmiri boy brought the two countries to the brink of war," she added. "It's very important to stop it now rather than wait for another bomb to tick."

Today's militancy in Kashmir is smaller and less deadly than it was at its peak in the late 1990s and early 2000s. 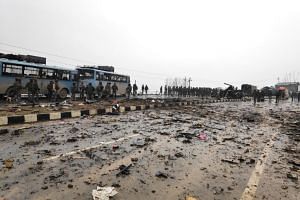 Indian security officials say there are around 300 to 400 active militants, most of them operating in South Kashmir. Some of them are locals, while others have crossed over from Pakistani-controlled territory.

The lure of militancy for local youths is a "cause of worry", said an Indian security official, who spoke on the condition of anonymity because he was not authorised to discuss the matter with the media.

Militants have used social media to "glamorise gun culture", he said, while at the same time, "the world has become smaller."

Events elsewhere in India or around the world now reverberate in Kashmir, feeding a sense that Muslims are under attack.

In Srinagar, Kashmir's largest city, paramilitary officers stand guard on bridges and roads against a backdrop of stunning snow-capped mountains.

Some walls still bear graffiti with the name "Burhan", a popular militant commander killed in July 2016.

His killing sparked massive and violent protests to which India responded with deadly force.

Mr Naeem Fazili remembers his son Eisa, a university student, coming to him in an agitated state after a young engineer was killed in the 2016 protests.

"You're saying that we should arm ourselves with degrees and knowledge" to help the Kashmiri people, Mr Fazili recalls his son saying. "But what did this degree give him?"

A school principal, Mr Fazili placed a premium on education and sent his two sons to the most prestigious private high school in Srinagar.

Eisa went on to study engineering at a university in the city of Jammu. Then, one day during his final semester in 2017, he disappeared.

The day after Mr Fazili began frantically searching for his son, he received a call from a neighbour.

"Uncle, do you know how to use Facebook?" the neighbour asked, and he directed Mr Fazili to a specific page.

There, he found a photo of Eisa with an AK-47 rifle in his hands.

It was "a bolt from the blue", Mr Fazili said. His son was later killed in an encounter with Indian security forces in March 2018, the authorities said.

Mr Umair Gul, a doctoral student who has studied the history of the insurgency in Kashmir, wrote recently that educated Kashmiris have long formed part of the militant ranks. But thanks to social media, such examples are gaining new prominence and serving as a recruitment tool.

Since the bombing on Feb 14, India has sent thousands more security personnel to Kashmir. 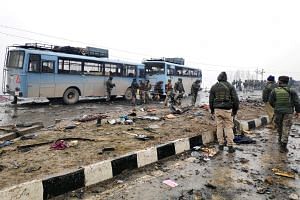 Why Pakistan can't rein in the terror group that killed US journalist Daniel Pearl, or the one that staged Mumbai attack

It outlawed an Islamist socio-religious group and arrested hundreds of its members. Authorities raided the homes of well-known separatist leaders. They also postponed fresh state elections, deepening the crisis of democracy in Jammu and Kashmir, whose assembly was dissolved in controversial fashion in 2018.

(Also last year, the Indian government began requiring foreign correspondents to apply for permits to conduct reporting in Jammu and Kashmir. The permit received by The Washington Post for this story limited the reporter to Srinagar and included a condition that the reporter not meet with people engaged in "anti-national activities", without defining such actions.)

At the University of Kashmir, students in headscarves and hoodies strolled along paths beneath towering Chinar trees, their trunks pale in the winter sunlight.

When Bhat disappeared from the campus on a Friday last year, his students didn't know what to think.

Some believed he had gone for a job interview in the South Indian city of Hyderabad. Then they worried that he had been detained by the security forces and launched a day-long protest to demand his release.

Bhat's father, Mr Abdul Rahim, 64, a retired civil servant, broke down as he recalled the phone call he received from his son early on a Sunday morning last May.

The professor turned militant told his parents that he was trapped in an encounter with the security forces and was going to become a martyr, his father recalled. He told them not to worry, that they would meet in the next life.

Those who knew Bhat expressed shock that he had turned to militancy but not, ultimately, surprise at his motives.

"In Kashmir, anything is possible," said Mr Pirzada M. Amin, chair of the sociology department at the University of Kashmir. "It is a conflict zone. It can influence anybody."