The Feb 14 attack that killed at least 40 Indian paramilitary police, making it the deadliest in Kashmir during a 30-year-long insurgency, increased tensions between Pakistan and India. The nuclear-armed neighbours both said they had shot down each other's fighter jets late last month.

China placed a "technical hold" on the request, according to a note from China's UN mission to the committee, seen by Reuters. China gave no reason for the hold, which places the request in limbo.

China had previously prevented the sanctions committee from sanctioning Azhar in 2016 and 2017.

Chinese Foreign Ministry spokesman Lu Kang said earlier on Wednesday that "discussions on this issue must be conducted following the rules and procedures of the UN Security Council and its subsidiary bodies".

A UN Security Council diplomat, speaking on condition of anonymity, said that if China continued to prevent the designation of Azhar, then other council members "may be forced to pursue other actions at the Security Council". 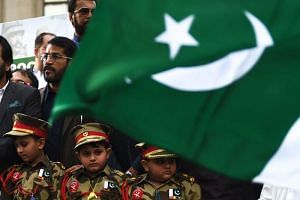 Why Pakistan can't rein in the terror group that killed US journalist Daniel Pearl, or the one that staged Mumbai attack

"The case for designating Masood Azhar - the leader of a group the UN already calls an Al-Qaeda-affiliated terrorist organisation - is undeniable," the diplomat said.

Another way for western powers to blacklist Azhar would be through the adoption of a Security Council resolution, which needs nine votes in favour and no vetoes by Russia, China, the United States, Britain or France to pass.

JeM is a primarily anti-India group that forged ties with Al-Qaeda and was blacklisted by the UN Security Council in 2001.

In December 2001, Jaish fighters, along with members of another Pakistan-based militant group, Lashkar-e-Taiba, attacked India's Parliament, which almost led to a fourth war between the two countries.