COLOMBO (REUTERS) - After coming under fire for not acting on warnings about Easter bombings that killed more than 250 people, Sri Lankan President Maithripala Sirisena is now facing criticism over his leadership in the aftermath of the Islamist attacks.

On Monday last week (May 13), just as anti-Muslim riots were spreading in apparent reprisal for the attacks, Mr Sirisena embarked on a three-day trip to key financier China, leaving some Sri Lankans feeling abandoned.

Going ahead with his son's wedding on May 9 also struck some as an affront to families still in mourning after the April 21 bombings, claimed by the Islamic State in Iraq and Syria (ISIS), which struck churches and hotels.

That leaves Mr Sirisena in a weak position ahead of this year's presidential election, voters and analysts say, potentially paving the way for former wartime defence chief Gotabaya Rajapaksa to take over.

Mr Sirisena's allies say he did the best he could in a volatile situation, citing measures like temporarily shutting down social media and deploying the army to stem violence in the multi-ethnic, Buddhist-majority island.

But that rings hollow to voters like 56-year-old construction worker Sunil, who voted for Mr Sirisena in 2015 amid hopes the career politician would combat corruption but now feels the President has not focused on governing.

"The President has no time for this because he is busy going all over the place," said Sunil on a recent morning in Colombo, vowing never to vote for Mr Sirisena again.

Mr Sirisena returned to Sri Lanka on Thursday and only addressed attacks on Muslim homes and shops on Friday, five days after the violence erupted.

Some disgruntled Sri Lankans were also frustrated that Mr Sirisena's son's wedding went ahead. It was originally scheduled to be held in the Shangri-La, which was bombed, and ultimately celebrated at the Hilton Colombo.

Mr Sirisena, one user identified as @sankadon tweeted, "cant even postpone the extravagant wedding at least (for) the tears and blood of the people who lost their lives due to his inability".

Spokesman Ekanayake pushed back at the criticism, saying the wedding was scaled down and that Mr Sirisena did not attend all the festivities.

The criticism comes on top of accusations that government paralysis due to a feud between Mr Sirisena and Prime Minister Ranil Wickremesinghe prevented warnings about the attacks from being disseminated.

Both men, who fell out after a political crisis in October, say they were not privy to the warnings.

Mr Sirisena was in Singapore with family when the attackers struck. He returned to Colombo 15 hours later, appointed a panel to probe defence lapses and replaced both the police chief and the defence secretary. 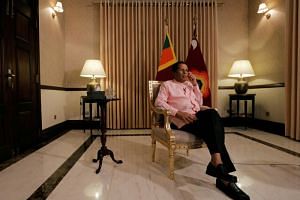 There are no political polls in Sri Lanka, but analysts said Mr Sirisena was on the back foot in elections that must be held by December.

"President Sirisena does not have a fighting chance," said Eurasia analyst Akhil Bery.

Mr Wickremesinghe is also seen as a lame duck due to disappointment over the economy under his watch.

To be sure, Mr Sirisena's chances of re-election prior to the attack were also seen as slim, but he had been vying for an alliance with former president Mahinda Rajapaksa.

That now seems impossible, with Mr Rajapaksa's brother Gotabaya, who is running for office, doubling down on criticism that the attacks happened because the government dismantled intelligence networks he built up during Sri Lanka's 25-year civil war with Tamil rebels.

"Sirisena had the idea of contesting, but there is no chance at all (of winning), especially after the attack," said political commentator Kusal Perera.

Auto rickshaw driver Shantha, who did not provide a surname, has switched from supporting Mr Sirisena to backing Mr Rajapaksa.

"We did not see quick decisions to bring the situation in the country back under control," Shantha, 37, said of the government.

"I will vote only if Gotabaya Rajapaksa contests."