During their meeting, PM Lee welcomed the Japanese G-20 Presidency's efforts to strengthen engagement between the G-20 heavyweights and the wider United Nations membership through the Global Governance Group (3G), said a spokesman from the Prime Minister's Office (PMO).

The 3G is an informal coalition of 30 small and medium-sized states, including Singapore.

Mr Lee and Mr Abe also reaffirmed the excellent relations between Singapore and Japan, noting that both sides were pursuing new areas of bilateral cooperation, including infrastructure development in third countries.

They reiterated their commitment to working closely to achieve an expeditious conclusion to the Regional Comprehensive Economic Partnership (RCEP), by the end of this year.

PM Lee is in Japan on a working visit until Sunday. He is attending the G-20 Summit at the invitation of his Japanese counterpart. 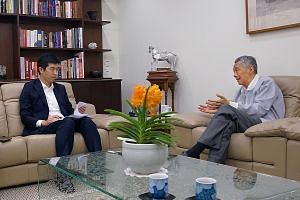 Singapore is one of eight non-G-20 countries invited to attend the summit.

Mr Lee thanked Mr Abe for the invitation and expressed support for the ambitious and forward-looking agenda of Japan's G-20 Presidency. The summit is taking place against a backdrop of trade and geopolitical tensions, and will include a meeting between United States President Donald Trump and Chinese President Xi Jinping.

Leaders from 20 economic heavyweights are attending the summit.

Officials from the PMO and Monetary Authority of Singapore are also part of the delegation.