HANOI (AFP) - The future of North Korea's decades-old Yongbyon nuclear complex was expected to be on the negotiating table in Hanoi on Thursday (Feb 28) at leader Kim Jong Un's second summit with US President Donald Trump.

It has long been at the heart of Pyongyang's atomic development programme, but remains shrouded in secrecy. Here is what we know about it:

About 100 kilometres north of Pyongyang, Yongbyon is made up of dozens of buildings related to North Korea's nuclear weapons programme.

Opened in 1986, it is home to the country's first nuclear reactor, with a five-megawatt capacity, and is the only known source of plutonium for the North's weapons programme.

It also produces other key fuels for nuclear bombs - highly enriched uranium and tritium - and, according to a 2019 report by the Stanford Centre for International Security and Cooperation, has been expanding even amid the recent diplomatic thaw.

HOW IMPORTANT IS IT?

Yongbyon is not believed to be the North's only uranium enrichment facility and closing it down would not in and of itself signal an end to North Korea's atomic programme. 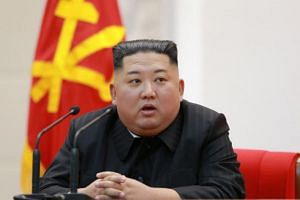 US intelligence believes Pyongyang has at least two more uranium plants - one near Kangson, just outside Pyongyang, and another at an undisclosed location.

A Yongbyon closure "may *slow* the growth of North Korea's fissile material stockpile, but it would not *cap* it", tweeted Dr Jeffrey Lewis, a researcher at the Middlebury Institute of International Studies at Monterey.

Critics also note that North Korea has already produced a stockpile of fissile material with which to build more bombs.

"It is important to be precise about what a shut-down accomplishes and what it does not," Dr Lewis added.

WHAT DOES THE NORTH WANT IN EXCHANGE?

When South Korean President Moon Jae-in went to Pyongyang for a summit with Mr Kim in September, the North offered Yongbyon's "permanent destruction", but only if the US took "corresponding actions".

The qualification goes to the heart of one of the disagreements between Washington and Pyongyang - the North wants the US to make concessions step-by-step along the way, particularly sanctions relief, while Washington has insisted the restrictions must remain in place until denuclearisation is completed.

HAVE WE BEEN HERE BEFORE?

Pyongyang has agreed to mothball Yongbyon in the past.

The main reactor was shut down in 1994 under an agreement with Washington, only to be restarted in 2003 after the deal was derailed.

Another agreement to shut down the reactor was signed in 2007, and the North blew up a cooling tower as a token of its commitment.

But that deal also fell apart when relations soured and Pyongyang reactivated the reactor by cooling it with river water.

Experts say previous broken promises show that simple deactivation will not be enough.

"This demonstrates the need for (1) verification by trusted inspectors, (2) acceptance that somethings can be reversed, (3) the ability to reverse economic inducements," tweeted Ms Melissa Hanham, a researcher at the One Earth Future foundation.

HOW COULD IT BE CHECKED?

In the past, North Korea has allowed in UN nuclear inspectors in exchange for concessions. International Atomic Energy Agency officials carried out checks from 1994 to 2002 and again from 2007 to 2009.

But Pyongyang expelled them in 2009 ahead of the second of its six nuclear tests and has since refused to allow international inspections on its territory.

And the IAEA has said its representatives were never given full access to the complex, including the uranium enrichment facilities.