In the article, the writer calls for more transparency, with businesses seemingly having more influence in matters of the state.

JAKARTA (THE JAKARTA POST/ASIA NEWS NETWORK) - Pressure from the business world forced the government last week to back off from its decision to open up more of the Indonesian economy to foreigners, which it had highlighted earlier as part of its latest economic reform package.

How is that possible, one may rightfully ask.

In one sense, it is a reflection of the lobbying strength of the business world, as represented by the Indonesian Chamber of Commerce and Industry and the Indonesian Employers Association.

In another, it shows how the business world is well, if not thoroughly, represented both in the executive and the legislative branches of government.

Government in a democratic Indonesia has inevitably become more pro-business.

Successive administrations in post-Soeharto Indonesia have all been pro-business.

It is more a question of how close they are to the business world.

The owner of a small furniture business, however, was elected in 2014 by virtue of his proven leadership and managerial skills in leading the Surakarta mayoralty from 2005 to 2012 and the Jakarta special capital region from 2012 to 2014.

His deputy, Jusuf Kalla, comes from the business world and began his political career in the Golkar Party, historically the most pro-business party going back to the Soeharto years.

Kalla, who also served as vice president to Susilo Bambang Yudhoyono from 2004 to 2009, built the Kalla family business empire from his home province in South Sulawesi. 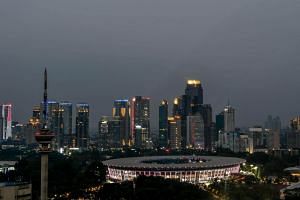 The battles to come for Jokowi

The Jokowi-Kalla election in 2014 showed voters have no qualms about businesspeople running for political office.

The intrusion of business into government in Indonesia has gone far deeper in the two decades since Soeharto's departure.

More and more regional governments are now headed by businessmen.

Businesspeople outnumber people from a non-business background in eight of the 10 political parties in the current House of Representatives.

The Prosperous Justice Party (PKS) and the National Awakening Party (PKB) are the two exceptions.

If Soeharto in the past preferred military men as ministers, Cabinets are now filled more and more by business types.

In Jokowi's Cabinet, at least five come from the business world.

There is nothing illegal about the marriage between business and the government.

Jokowi used his business knowledge to demand cuts in red tape, including at seaports, which he said was slowing down businesses.

Through his insistence, Indonesia improved its ranking in the World Bank's annual Ease of Doing Business index from the 104th to the 73rd position between 2014 and 2019.

But the presence of more businesspeople in the executive and legislative branches of the government raises the question of possible conflicting interests and unethical practices when they use their positions to affect laws and policies that favor their businesses.

Ironically, the potential for collusion between government and business has grown and widened in a democratic Indonesia. Soeharto was forced from power in 1998 precisely because rampant corruption virtually bankrupted the country.

Little has changed since then, in spite of the anti-KKN (which stands for corruption, collusion and nepotism) campaign proclaimed by successive elected presidents.

Soeharto was more subtle, whereby the collusion was confined to a few chosen tycoons, the most prominent of which was Sudono Salim, founder of the Salim Group.

This small group was later joined by Soeharto's grownup children, in the 1990s.

These groups enjoyed concessions, privileges and lucrative contracts that allowed them to build their business empires.

The Corruption Eradication Commission (KPK), set up in 2004, may have netted hundreds of big-time corrupt officials, but it seems to have kept collusion and nepotism practices untouched.

The marriage between business and government is not problematic, as long as there is transparency.

More problematic are the illicit relationships that escape detection.

The English word "adultery" hardly describes this relationship, since in the context of the world where the word comes from, it is something that seems to be socially acceptable.

The Indonesian word perselingkuhan, on the other hand, not only carries an immoral connotation, but since it is widely practiced nevertheless and people turn a blind eye, it connotes hypocrisy.

There are few winners and many losers in this perselingkuhan.

It leads to unfair competition, protectionism for a few players, space for rent-seekers and for long chains of middlemen controlling trade, farmers being squeezed for their products and consumers made to pay higher prices, and a tata niaga, or a trade system that encourages or protects cartel practices.

Next time we elect another pro-business government, we should be more critical and ask the question, whose business exactly?

Business mixing with politics has become a fact of life in Indonesian democracy.

We hope people are smart enough to know who they are voting for in every election.

If it's any consolation, Indonesia is not the only one with this problem.

The world's oldest democracy has a hotel mogul as president.

The writer is a Senior Editor, with The Jakarta Post. The paper is a member of The Straits Times media partner Asia News Network, an alliance of 23 news media organisations.