SINGAPORE - Former businessman Sandiaga Uno was a relative unknown in Indonesian politics until he announced in 2016 he was running for the deputy governor post in the Jakarta elections  – which he won last year.

Then, this year, the 49-year-old again created waves when he left his post to contest in next April's presidential election as a running mate of retired three-star general Prabowo Subianto, 67. The pair will challenge President Joko Widodo, 57, who is seeking a second term, and his vice-presidential pick, 75-year-old Muslim cleric Ma'ruf Amin.

Mr Sandiaga told The Straits Times in an interview on Monday (Oct 29) ahead of his talk on "Indonesia's Future Economy" organised by ISEAS-Yusof Ishak Institute that he was not ambitious and it was a "last-minute decision" by Mr Prabowo, 67, who chairs the Gerindra Party.

"I was very shocked... Mr Prabowo said 'You have the necessary background for the economy, and secondly you represent the young generation'," he said.

Mr Sandiaga had served as vice-president of the Small and Medium Enterprises at the Indonesian Chamber of Commerce and Industry (Kadin) from 2009 to 2010.

He said he was living and working in Singapore as an investment manager when he found himself jobless after the company he worked for collapsed during the financial crisis in 1997 to 1998, forcing him to return to Indonesia.

He set up a small investment firm, Saratoga Capital, and it grew to become one of Indonesia's largest. He said: "I went back to Indonesia with almost zero or negative net worth. I built my business from zero and Indonesia has been so kind to me. Indonesia has provided me with unimaginable fortune and, for that, I need to pay back to my country."

The gubernatorial election in 2017 was widely-regarded as divisive, dominated by issues of race and religion, and there were fears these would emerge in the ongoing presidential election. But Mr Sandiaga said their focus will be on the economy.

These include an overhaul of labour laws, measures to boost domestic and foreign investment and bread-and-butter issues such as creating employment for youths and lowering the cost of living. 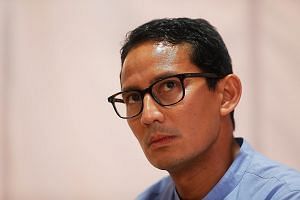 Candidates' picks for running mates surprise many in Indonesia

He sparked a political debate this month (Oct 20) when he said the price of a plate of chicken rice is more expensive in Indonesia than in Singapore. He said he was merely citing World Bank figures comparing prices of the same quality of rice and chicken feet.

"It wakes people up. People thought that's cheeky but it gets people's attention that our food prices are high," he said unapologetically.

During his 90-minute presentation on Monday followed by a question-and-answer session at Orchard Hotel, he discussed a wide range of economic issues from tax amnesty and digital economy to the uncertainty of laws in Indonesia, which makes the business climate unpredictable for investors.

"It's like playing a soccer match and in the middle of the match, you move the goalpost," he said, to laughter.

His wealth may also prove a bane to him. Mr Sandiaga has been accused of paying 500 billion rupiah (S$45.4 million) each to coalition parties National Mandate Party (PAN) and the Prosperous Justice Party (PKS) so they would choose him as a vice-presidential candidate. He furiously denied this.

"I'm under a magnifying glass, people are looking at me with a microscope. I won't do something silly like that. I won't want to ruin my career in politics. Politicians come and go, integrity stays," he said.

On his name appearing in the "Panama Papers" scandal, detailing his offshore companies, he said: "Offshore structures are common to making investments... and it's all perfectly legal. I have nothing to hide."

Being boyish-looking and also new to the political scene, he has also been called a "politikus kemaren sore" or greenhorn politician. But he is only focused on campaigning to win people's hearts.

While he and Mr Prabowo may be trailing on popularity polls, he believes they are making "good progress".

Mr Sandiaga spoke to The Straits Times on arrival to Singapore by ferry from nearby Batam, where he had been campaigning all morning.

Seated in a packed car with his aides on the way to his talk, he said of campaigning: "It's tough... I had five events in Batam, I changed shirt three times, I was planning to take a nap but there are some friends joining from Batam just to speak to me on the ferry ride."

However, the father of three has no regrets leaving the business world and all directorships to pursue a life in politics.

"The risk in politics is that you are suddenly thrown into a position that’s quite unpredictable, but that’s life in the political fast lane in Indonesia,” he said.