Malaysia's Bersih movement is in the media spotlight again as it plans to hold a massive rally this weekend to demand the resignation of Prime Minister Najib Razak.

Here is what you should know about Bersih:

Bersih, which means "clean" in Malay, refers to the Coalition of Free and Fair Elections. It is a civil society movement consisting of 84 non-government organisations calling for a thorough reform of the electoral process in Malaysia. It is led by Maria Chin Abdullah from the Women's Development Collective (WDC). Its previous chief was former Bar Council president Datuk S. Ambiga.

Bersih was first launched in November 2006 as a political party-driven movement with members consisting of opposition political leaders and representatives from the civil society. In April 2010, the movement was re-named Bersih 2.0 as a fully non-partisan movement free from political influences.

2. What are its demands?

Bersih has eight demands. These include the updating of the electoral roll to remove "phantom voters" - deceased persons, multiple persons registered under a single address or non-existent addresses, and reform of postal ballot to allow voting not only for Malaysian citizens living abroad, but also those within the country who cannot vote in their constituency on polling day.

The group also demands the use of indelible ink to prevent voter fraud and a minimum 21 days for campaigning to allow voters more time to gather information and deliberate on their choices.

3. What happened in past rallies?

The first rally by Bersih at Dataran Merdeka in Kuala Lumpur was sparked by allegations of corruption and discrepancies in the Malaysian election system that favoured the ruling Barisan Nasional (BN) coalition. Supporters were urged to wear yellow T-shirts as a symbol of protest. Organisers estimated that between 30,000 and 40,000 people from various races and all walks of life took part in the rally.

The protest was credited for the shift in political landscape in Malaysia's 2008 general election, when the BN failed to obtain a two-thirds majority for the first time since 1969.

The second rally, known as the Walk for Democracy, was organised to protest alleged vote rigging and other electoral abuses in the Sarawak state election in April 2011. An estimated 50,000 people took part in the rally. Malaysians living in 32 cities overseas also rallied in solidarity with the Kuala Lumpur protesters.

Police fired tear gas and used water cannons with chemical-laced water at the demonstrators to stop the march. More than 1,000 people were reportedly arrested.

In early April 2012, the Public Select Committee released a report of its findings on electoral reform and it was passed in the House of Representatives with no debate between the opposition and ruling parties. An opposition minority report was not included in the final report and none of Bersih's demands were met. This led to Bersih calling for a third rally on April 28 that year.

The protest was peaceful as the participants marched from various locations towards Dataran Merdeka. But scuffles broke out when some protesters broke through a police barricade, with police riot units responding with chemical-laced water cannons and tear gas. Hundreds of protesters were arrested.

Opposition leader Anwar Ibrahim and five others were charged with participating in a street protest but a Sessions Court later ordered a discharge not amounting to an acquittal.

Bersih 4.0 is the fourth rally planned for three cities on Aug 29-30 to push for Prime Minister Najib Razak's resignation as well as institutional reforms to prevent prime ministerial corruption. The rally comes amid allegations in the Wall Street Journal that US$700 million (S$981 million) in state funds was deposited into Mr Najib's personal bank accounts and alleged mismanagement of debt-ridden state investor 1Malaysia Development Berhad (1MDB).

Bersih says recent events in Malaysia, including the removal of Abdul Gani Patail as Attorney-General and the removal of ministers who had spoken out on the 1MDB issue, have triggered the call for the rally.

Organisers say protests will be held in Kuala Lumpur, Kuching and Kota Kinabalu from 2pm on Aug 29 until midnight Aug 30.

5. What did the police say? 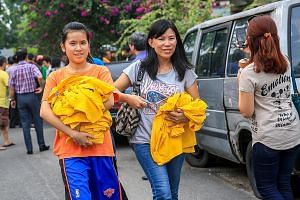 The Malaysian police have declared that Bersih 4.0 is illegal due to the organisers' failure to furnish permissions from premises owners to use their locations as rallying points. Police say those who join the rally can face legal action under the Peaceful Assembly Act.

Inspector-General of Police Khalid Abu Bakar has also warned all quarters not to incite violence. He was responding to news reports that an anti-Bersih group would be training with machetes and swords as preparation to counter the Bersih rally.

But the group leader, Umno division chief Jamal MD Yunos, has said the training is for self-defence and not to incite violence. He plans to mobilise 30,000 people to counter the Bersih rally.

Bersih chief Maria Chin Abdullah has insisted the rally will take place as planned and the group will work with the police to ensure that the event is peaceful.