PETALING JAYA (THE STAR/ASIA NEWS NETWORK) - A group which says it is peace loving is preparing for a potentially violent protest this weekend during a rally by electoral reform group Bersih.

Its leader, Datuk Jamal Yunos, said to meet any eventuality on Aug 29 and 30, his men had trained, and showed their skills in a demonstration on Tuesday in front of Sogo shopping complex where they broke tiles and wood with their heads and back.

"There will be a closed door training for our members tonight (Wednesday) and they will use long knives (parang) and swords for self-defence," he told The Star Online.

Jamal, the Sg Besar Umno division chief, said some 30,000 people from over 200 non-governmental organisations would be mobilised this weekend to coincide with the Bersih 4 rally.

"The reason we are gathering there is to pressure them to cancel the rally as it brings no good to the country and people.

"We will call off our gathering, if they call off theirs," he said, adding that Bersih participants should adhere to the police order to move the rally to an indoor stadium.

"They can do it at the stadiums, like the Shah Alam Stadium or Stadium Titiwangsa. No one will make an issue out of that," said Jamal. 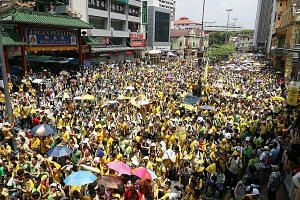 Bersih rally to proceed as planned on Saturday: Organisers 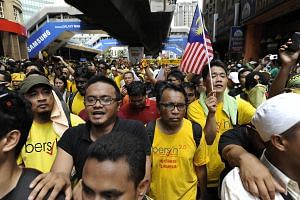 The group, whose members will don red t-shirts, would gather at Low Yat mall in Bukit Bintang at 9am on Saturday and march to Dataran Merdeka along Jalan Pudu at 10am.

On Tuesday, the group showed off their skills in front of the Sogo shopping complex, saying that it was part of their self-defence preparations should there be a clash.

"We will not initiate violence unless we are attacked by the 'yellow' (Bersih) team, then our people in red will be able to defend themselves," he said, adding that the previous Bersih rallies were violent.

Bersih is planning the rally - its fourth so far - to demand for Prime Minister Datuk Seri Najib Tun Razak to resign over his handling of state investor 1Malaysia Development Bhd (1MBD).

It said the overnight rally will be held in Kuala Lumpur, Sabah and Sarawak starting at 2pm on August 29. The police have declared the rally "illegal".