NAM DINH, Vietnam (AFP) - The father of a Vietnamese woman accused of killing the half-brother of North Korea's leader had washed bed sheets in anticipation of her homecoming after her Indonesian co-accused was suddenly freed earlier this week.

But his daughter is still in custody after a Malaysian prosecutor said Thursday (March 14) Doan Thi Huong would remain on trial for the gruesome murder of Kim Jong Nam with a toxic nerve agent at a busy Kuala Lumpur airport in 2017.

"I am very sad. The government gave us the best support but the other side could not solve it, what can we do," said Huong's father Doan Van Thanh from his rural village in northern Vietnam.

Mr Thanh was sure it would work. He insists his daughter was tricked into Kim's murder and believes she thought she was part of a prank for TV, as she has said in court.

She could face death by hanging if found guilty of the assassination.

"I still believe Huong is innocent," the parking lot attendant said at his home surrounded by rice paddies in Nam Dinh province. 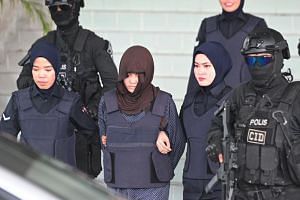 He has had little news from his daughter since she was arrested in February 2017, just three brief phone calls from custody on a borrowed phone asking after the family's health.

He implored his 30-year-old daughter not to lose hope, optimistic she could still be freed.

"Please be patient, the Vietnamese government will support your release," he said in a message to his daughter.

Huong's lawyer said he would try again to get the charges against her dropped after Thursday's ruling, which left Huong in tears in court.

A former hair salon worker, Huong was propelled into the global spotlight after the Cold War-style murder shocked the world.

The slight, round-faced girl left home after high school to study pharmacology and accounting in Hanoi.

But her life took a turn when she moved to Malaysia, where like so many migrant workers she sought a brighter future than the one on offer in her poor rice farming village.

Her flashy fashion, foreign boyfriends and edgy hairstyles raised eyebrows back home, a conservative hamlet where most people work in the fields.

Soon after she was charged with murder, unverified clips of her auditions for "Vietnamese Idol" started circulating online. Other unsubstantiated images showed the same young woman kissing a famous social media prankster on a popular YouTube channel.

Her family says she is a good girl who fell into the murder plot unwittingly.

Buoyed by the news that Ms Siti was freed - and after Vietnam's foreign minister and justice minister publicly called for Huong's release this week - they were certain she would be home soon.

"Why was the other girl was released, and not our girl? They were together. Why is this the outcome?" Huong's sobbing stepmother Nguyen Thi Vy said Thursday.

She was so hopeful her daughter would be back she bought extra cassava at the market for a celebration meal with the media that had gathered at her home since early Thursday.

"It is so unfair... we are calling for help from the most senior people at the trial to consider releasing my daughter, free her as soon as possible," she said.