Vietnamese citizen Doan Thi Huong is on trial for murder in Malaysia for the brazen Cold War-style killing of Mr Kim Jong Nam, the estranged half-brother of Mr Kim Jong Un, at a busy Kuala Lumpur airport in 2017.

Huong was accused alongside Indonesian Siti Aisyah, who was suddenly freed on Monday by a Malaysian court where the women were being tried.

Huong is set to appear in court tomorrow, after her lawyers asked the Malaysian Attorney-General to withdraw her murder charge.

Prosecutors may then inform the court whether the application is successful.

The call from Vietnam's Foreign Minister was an unprecedented public request from Hanoi, which generally does not get involved in criminal cases involving its citizens overseas. Vietnam provided legal counsel to Huong, but has refrained from publicly lobbying for her release until yesterday. 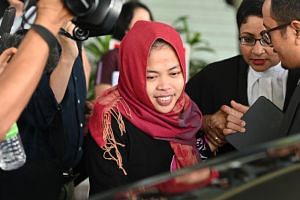 Siti's sudden release prompted questions about interference in Malaysia's justice system, particularly after the Indonesian government revealed that it had lobbied Kuala Lumpur on the case.

Malaysian Prime Minister Mahathir Mohamad said yesterday the decision was in line with "the rule of law". He denied that the Malaysian government caved in to diplomatic pressure to free Siti.

"I have no information (regarding that)," he said, in response to questions at a press conference in Parliament, reported The Star.

Huong and Siti have consistently denied the murder charge and have said they were tricked into carrying out the killing using a toxic nerve agent for what they thought was a prank. The women's lawyers say the real killers are four North Koreans - formally accused of the crime alongside the women - who fled Malaysia shortly after the assassination.

South Korea accuses the North of plotting the murder of Mr Kim Jong Nam, who was once seen as heir apparent to the North Korean leadership. Pyongyang denies the accusation.