PETALING JAYA (THE STAR/ASIA NEWS NETWORK) - Three temples in Kuala Lumpur have tightened security following the arrest of four suspects linked to an extremist religious group said to have ties with the Islamic State in Iraq and Syria (ISIS) terror group.

In a statement on Thursday (May 16), Sri Maha Mariamman Temple Devasthanam Kuala Lumpur, which runs the three historic temples, said it was wary after it was reported that one of the reasons cited for the planned attack was to avenge the death of fireman Muhammad Adib Mohd Kassim.

"We view the arrests seriously, and their intentions which had been planned, which was to target places of worship as well as entertainment outlets in a supposedly act of revenge on the unfortunate death of the fireman in the Seafield temple incident last year," according to the organisation.

It added that among the steps taken were random checks on bags and monitoring of visitors.

It also urged devotees to keep a watchful eye for suspicious characters.

"We are consistently looking at steps to be taken to elevate security and safety measures at all three temples," it said, adding that the Batu Caves temple alone drew an average of 3,000 tourists a day. 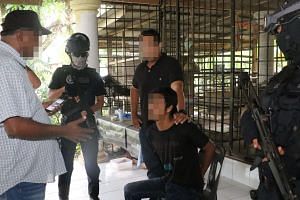 Fireman Adib, 24, was critically injured in the early morning of Nov 27 last year after he and his team members responded to an emergency call at the Seafield Sri Maha Mariamman Temple in Subang Jaya, where a riot had taken place earlier.

Mr Adib was taken to hospital and later transferred to the National Heart Institute for further treatment, but he died on Dec 17.

No one has been charged over the death, and there is an ongoing inquest into the incident.

Mr Adib's death has become a rallying call for some Malaysian Muslims, including those in the Malay-Muslim opposition parties, who feel that his death has not been addressed by the government.