KANCHANABURI (DPA, AFP, REUTERS) – A Thai millionaire once listed among the country’s richest people was found guilty on Tuesday (March 19) of poaching protected animals including a black leopard at a world heritage site, a court official told dpa.

While Premchai Karnasuta, president of construction giant Italian-Thai Development, was found not guilty of possessing a leopard carcass, he was convicted of three other poaching-related charges.

The verdict, handed out in a statement to reporters waiting at Thong Pha Phum courthouse, said Premchai was “sentenced altogether to 16 months”.

When asked if he had anything to say to society, Premchai said: “Only one thing, I’m sorry.”

Two others caught with him – his driver and cook – received lesser sentences, while his hunting guide was sentenced to three years and five months.

Premchai and the hunting guide, Thani Thummas, were also ordered to pay a fine of 2 million Thai baht (S$85,342).

A court official said the tycoon was immediately released on bail of 400,000 Thai baht as he was not considered a flight risk.

Thai courts sometimes grant bail immediately to a convicted person in the expectation they will appeal, and Premchai’s lawyer later confirmed he would challenge the verdict.

Wildlife rangers arrested the 64-year-old tycoon along with four other people in Thungyai Naresuan Wildlife Sanctuary, a world heritage site in western Thailand in February 2018.

Wildlife rangers said they heard gunshots and followed the sound, only to find the carcasses of a black leopard, a barking deer and Kalij pheasants left behind.

The black leopard – a vulnerable species – was found dissected and scalped.

The rangers, who said they were offered bribes but turned them down, also found two rifles, a double-barrelled shotgun, and various bullets by the campsite.

Park ranger Vichaen Chinnawing, who arrested the businessman and has been hailed as a hero in Thai media, said he was satisfied with the conviction.

"I have done my best in this case. If the soul of the dead leopard knows, it will be grateful,” he told AFP. 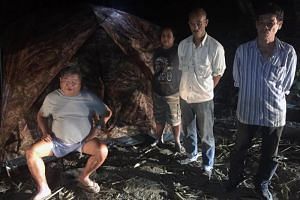 The incident has caused widespread public outrage, with many taking to social media to express their scepticism in the capability of the country’s justice system to bring the 64-year-old to justice, saying the system often lets the rich and powerful walk free.

Arrests and convictions for poaching happen often in Thailand but they are rare when it comes to prominent individuals.

Graffiti depicting black leopards has also popped up in various parts of the country in a bid to pressure the authorities to find Premchai guilty.

“(It) struck a chord with everyone who sees a double standard in the country’s law enforcement,” said Human Rights Watch’s Sunai Phasuk.

Premchai and his sister Nijaporn Charanachitta were listed by Forbes magazine in 2016 as Thailand’s 35th richest people with a net worth of US$630 million (S$851 milliion).