BANGKOK (THE NATION/ASIA NEWS NETWORK) - Thai construction tycoon Premchai Karnasuta on Wednesday (March 14) insisted that he was innocent of involvement in the much-publicised killing of a black leopard found at his campsite in a wildlife sanctuary, adding that he was upset that the public thought he was the killer.

"I'm not killer of the black leopard. I am sorry that the society views it that way. The truth will be known in court," he said.

He later told reporters that "the case has highly frustrated me and had a bad effect on me".

Premchai, the president of Italian-Thai Development Plc, was arrested with three others in February at his campsite in Thung Yai Naresuan Wildlife Sanctuary in Kanchanaburi province. Wildlife officials also seized hunting rifles and a shotgun as well as the remains of the butchered black leopard, a pheasant and a barking deer.

They also found a pot on a campfire, which a forensic examination later determined contained a soup made from the leopard's tail.

The tycoon and his three companions were charged with nine poaching-related counts, all of which they denied.

The story and photos of the butchered leopard have since gone viral on social media, eliciting outrage from many quarters of society and calls for a serious and transparent prosecution of the billionaire.

Premchai appeared in public on Wednesday for the first time since he was released on bail to hear three additional charges of possession of African elephant tusks without a permit, possession of illegal guns and attempted bribery.

He said he was not guilty of killing the leopard or of the three additional charges before he was escorted to a court on Rachadapisek Road. Premchai was then released on 300,000 baht (S$12,624) bail with the condition that he could not travel abroad.

As Premchai was walking with his lawyer before applying for bail, a man was heard yelling: "Is leopard meat delicious?" Premchai did not respond.

Meanwhile, a small group of protesters waited for Premchai in the court building and showed him a placard that read "Save Wildlife" and photos of a black leopard.

Deputy national police chief Pol General Srivara Rangsibhramanakul told reporters that police would ask Department of Fine Arts officials to inspect a musket seized from Premchai's house in Bangkok to see if it is an artefact or antique.

"If the officials consider it as either one, Khun Premchai can be charged with violating the Historic Sites and Artefacts Act," said Srivara, the chief investigator in the case.

Referring to the elephant tusks, which had been registered as coming from Thai elephants but proved to be of African origin, Srivara said police would determine whether they were stolen, which might result in new charges against Premchai of receiving stolen objects.

The tusks were registered under the name of Premchai's wife, Kanittha Karnasuta, who will report to police next Tuesday.

Police had to be careful investigating the case because Premchai could potentially sue the authorities, Srivara added. 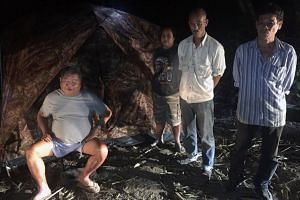 Apparently to counter criticism that he had taken sides with Premchai, Srivara said the law treated people equally regardless of their wealth. "Under the law, there is only an offender or an innocent person," he said.

Police will seek another interview with Premchai to make the case "airtight", Kamon said.

Meanwhile, Somchai Na Nakhon Panom, an archaeologist at the Fine Arts Department, said the musket could be from the period of King Rama V, which he believed qualified it as an artefact, and probably had been made in Britain.